The LAPD officer recorded on cellphone video repeatedly punching a man during an arrest in Boyle Heights previously shot three people in three separate incidents, including the 2010 killing of a day laborer near downtown LA that prompted three days of public demonstrations and unrest.

Officer Frank A. Hernandez was named in lawsuits as a result of at least two of those shootings, both alleging civil rights violations and excessive force.

LA’s police chief said the new incident is one of two troubling incidents involving officers in the last week. Eric Leonard reports for the NBC4 I-Team on Tuesday, May 5, 2020.

The LAPD would not release or confirm the name of the officer seen on the violent arrest video recorded on Houston St. April 27. A department spokesman said state privacy laws for police officers preclude the identification of anyone facing a personnel investigation, such as the officer seen in the video.

Hernandez could not be reached directly.

Attorney David Winslow would not confirm Hernandez is the officer seen in the video, but Winslow verified that he is representing the officer involved in the incident.

Winslow said Wednesday he believed the punching, while not 'pretty,' was justified because the man police stopped swung at the officer before the cellphone video recording began and attempted to grab the officer's hands before the first punch was thrown. 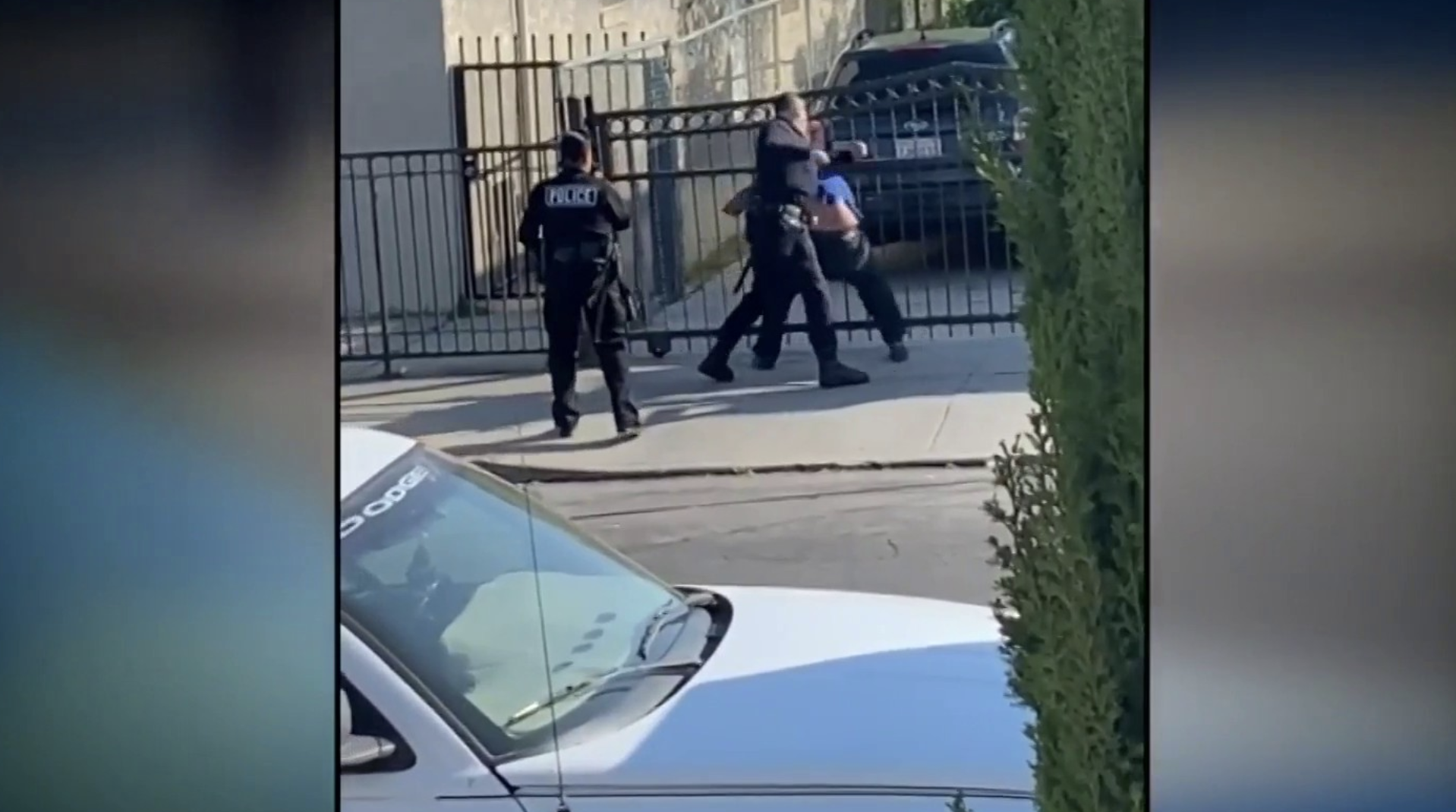 "The suspect was substantially larger than the officer, younger, and in better shape," Winslow said. "This isn't a police officer bullying someone who's smaller than him, this is an officer defending himself."

Winslow said he had viewed the officers' body worn video recordings that captured much more of the encounter and the dialogue exchanged between the man and police before the punches recorded on the cellphone video.

Chief Michel Moore said Tuesday the officer had been removed from patrol duty while the case was investigated, and Moore said he had "great concern" about what was seen on the cellphone recording.

"I recognize the public's concern, and how disturbed or troubling it may be to them, and my commitment is to ensure that our actions are consistent with our core values," Moore told the LA Police Commission.

According to other public LAPD statements Officer Hernandez's first on-duty shooting was on Nov. 29, 1999, when he shot a woman holding a handgun near 42nd Street and Arlington Avenue. The woman survived.

On Dec. 12, 2008, Hernandez shot a man in the leg while officers were searching for a different person in the neighborhood. The wounded man, Joseph Wolf, later sued in federal court, alleging Hernandez and others then falsely accused Wolf of assault. The assault charge was dropped, according to court records.

The confrontation happened on a busy weekend in front of dozens of onlookers, and three nights of protests followed in the streets near the LAPD's Rampart Station. The shooting was found to be lawful and within department policy.

The LAPD declined to identify the person punched by the officer in the April 27 incident. The spokesman said even though the man was handcuffed at the scene the man was never arrested or booked, so the department had no obligation to make the man's identity public.

Winslow, the attorney for the officer involved, said the man and his client had never had interactions before last week. He said the radio call that started the events notified the officers the man was a gang member who was camping illegally on the property of a church.