More than 2,000 people and 100 pets have taken shelter at the Mandachi Hotel and Spa, with row upon row of numbered mattresses under an incongruous glittering disco ball.

As Olga Okhrimenko walked into a bustling ballroom-turned-refugee shelter at a four-star Romanian hotel, her corgi, Knolly, strained at the leash anxiously seeking the warmth inside. It had taken them three days to flee Ukraine by car, bus and taxi in the bitter cold.

The 34-year-old Ukrainian marketing manager could hardly contain her emotions, and a simple “are you OK?” filled her eyes with tears she thought she no longer had.

The first refugees began arriving more than a week ago at the Mandachi Hotel and Spa in Suceava in Romania, where the owner decided to make the lavish, 850-square-meter ballroom available to them. Since then, more than 2,000 people and 100 pets have taken shelter here, with row upon row of numbered mattresses under an incongruous glittering disco ball.

They are part of the swiftest refugee exodus so far this century, in which more than 1.7 million people have fled Ukraine in just 10 days, according to the United Nations Refugee Agency. Since the war started on Feb. 24, more than 227,000 Ukrainians have crossed into neighboring Romania, according to local authorities.

Like Okhrimenko, some of the refugees at the Mandachi have fled cities on the front lines of the war.

“Whenever somebody asks me where I am from, and I say Kharkiv, their expression, it’s like I arrived from Hiroshima,” Okhrimenko told The Associated Press from mattress number 60. “Then, I remember everything going on there and I break down.” 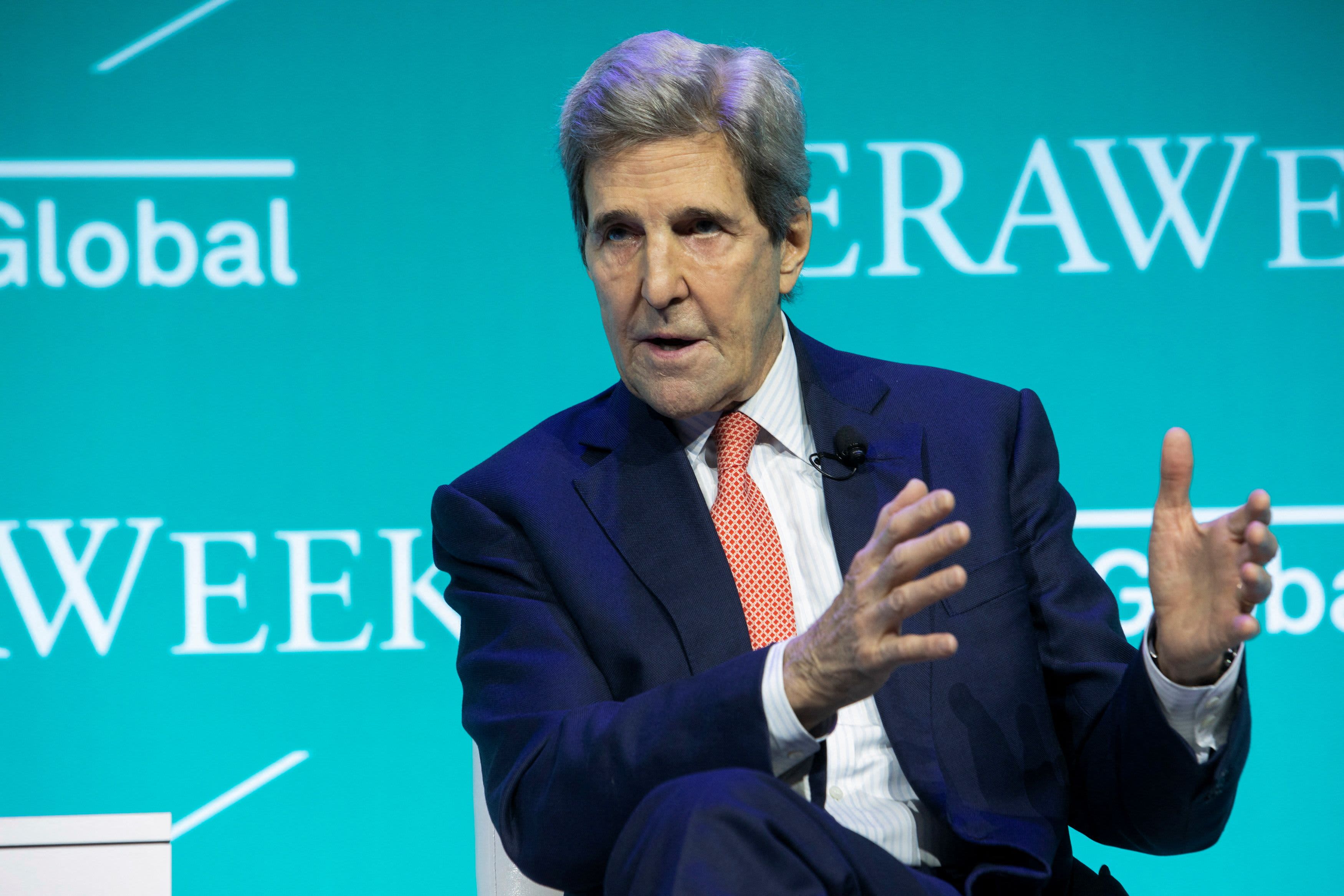 Russia's War on Ukraine Is a ‘Defining Moment' of the Century, Says John Kerry

After five days of shelling, she decided to flee Kharkiv on March 1 with Knolly, a couple of friends and their two cats. Their car passed by the city’s central Freedom Square just 20 minutes before it was engulfed by a giant ball of fire in a Russian military strike.

As she spoke, volunteers on megaphones interrupted several times to announce buses leaving for Italy, Germany, Bulgaria and other European nations. The room was chaotic, filled mostly with women and children, as men stayed in Ukraine to fight. Some spoke Russian, underlining the sense of a war on family.

The majority of the refugees were Ukrainian, but there were also Nigerians, Moroccans, Italians, Chinese and Iranians. Toddlers cried in the arms of exhausted mothers, who took deep breaths to calm their children and themselves. Cats and dogs of all sizes shared beds with their owners, and one stressed Chihuahua with bulging eyes bit anyone who attempted to pet it.

Some 300 volunteers, translators and social workers take turns to help here. In the mornings, they change the mismatched sheets on vacated mattresses, placing a “reserved” or “free” handwritten sign over them. In the reception area, the two bars display not alcohol but an array of diapers, toothbrushes, snacks and even surgical masks and disinfectant gel.

The United Nations announced on Sunday that more than 1.5 million refugees from Ukraine had crossed into neighboring countries within ten days since Russia's invasion. A Ukrainian official says that a second attempt to evacuate civilians has failed due to Russian shelling.

At the opposite end of the King Salon, at mattress number 82 near stacks of red velvet chairs, 85-year-old Nellya Nahorna sat in silence combing her gray hair with her fingers.

It was the second time this Ukrainian grandmother had fled war. In 1941, when she was just 4 years old, Nahorna was injured by shrapnel in Nazi Germany’s invasion of Ukraine, she said.

“The first night of the war, my mother grabbed me from my cradle and ran to take the last car that carried the wounded to the border,” Nahorna recalled in a soft, low voice.

Now, more than 80 years later, it was her daughter, 57-year-old Olena Yefanova, who grabbed her on the first day of the war and crossed the border. They came from the town of Zaporizhzhia, where Europe’s largest nuclear power plant was hit by Russian shelling last week.

“This war is different,” Nahorna said in Russian. In World War II, the enemies were German “fascists,” she said. But now, she was fleeing from her “brothers.” They had to make stops along the way to get her a Ukrainian passport.

“I would like to tell the Russian mothers .... help by keeping your sons right next to yourselves and don’t let them fight and attack other countries,” Nahorna said.

In an astonishing accomplishment, the same grandmother who leaned on a cane to make it from her mattress to a table a few steps away had walked the last 5 km (3 miles) to Romania by foot. At one point, Nahorna’s heart seemed like it was giving up, and a doctor gave her some pills so she could continue, her daughter said.

“My mother clenched her will into a fist and left,” Yefanova said proudly. “She understood that this is going to be hard but she took it steadfastly.”

Yefanova had left her husband and one son behind, enlisted to fight the Russians. She wept as she showed a photo of them on her phone screensaver.

“Our kids play a game called little tanks - (Russian President Vladimir Putin) is playing his own version of this game,” she said. “And he is (using) his people in this game.”

A row behind Yefanova on mattress 34, Anna Karpenko thought of her partner as their 6-year-old son played with a yellow balloon.

Before she left him at their home in Chornomorsk, on the outskirts of Ukraine’s biggest port city of Odesa, he promised they would get married after the war. But “when we said goodbye, it felt like it was forever,” Karpenko said, wiping tears from her eyes.

Normally, she said, she’s an optimistic person. Now she and her son both cry every day.

Russian ships have made repeated attempts to fire on the Black Sea port of Odesa, according to Ukrainian officials. Karpenko said people in her town had gathered on beaches to fill bags with sand.

Originally from Crimea, Karpenko speaks Russian, worked for a Russian language school and has relatives in Donetsk, one of two Russian-backed separatist regions in eastern Ukraine. The war in Ukraine has divided her family, with her Donetsk relatives supporting Putin.

“They think that all of their problems are caused by Ukraine,” she explained in frustration. “They worship (Putin) as if he was a God.”

A Ukrainian couple fighting against the Russian invasion got married Sunday on the front line.

She’s given up trying to tell them it was Russian strikes she was fleeing.

By the next morning, Okhrimenko and her corgi had left. Her husband, who had moved to Germany only a few months ago, drove down to pick them up. She had planned to join him eventually, but never thought she would suddenly be chased out by sirens and explosions.

“We just took a deep sigh of relief together and hugged each other so strong,” Okhrimenko told AP by text message from the road to Germany.

Karpenko, her son and her mother boarded a bus also bound for Germany. On the same bus were Yefanova and Nahorna, the 85-year-old grandmother.

Thirty hours after leaving the makeshift shelter, they were still on the road. “The longest journey in my life,” Karpenko texted AP from a gas station in Austria.

As one bus left, others arrived at the Hotel Mandachi, full of freezing refugees carrying their children and their belongings. With no end to the war in sight, the wedding parties that once took place in the ballroom have been postponed indefinitely.