"When in God’s name are we going to do what has to be done?” President Biden asked. “Why are we willing to live with this carnage?"

The 18-year-old gunman who slaughtered 19 children and two teachers at a Texas elementary school barricaded himself inside a classroom and “began shooting anyone that was in his way,” authorities said Wednesday in detailing the latest mass killing to rock the U.S.

Law enforcement officers eventually broke into the classroom and killed the gunman, who used an AR-style rifle. Police and others responding to Tuesday’s attack also went around breaking windows at the school to enable students and teachers to escape, Lt. Christopher Olivarez of the Texas Department of Public Safety said on NBC’s “Today” show.

The killer "barricaded himself by locking the door and just started shooting children and teachers that were inside that classroom,” he said. "It just shows you the complete evil of the shooter.”

Dillon Silva, whose nephew was in a nearby classroom, said students were watching a movie when a bullet shattered a window. Moments later, their teacher saw the armed assailant walk past the door.

“Oh, my God, he has a gun!” the teacher shouted twice, according to Silva. “The teacher didn't even have time to lock the door,” he said. 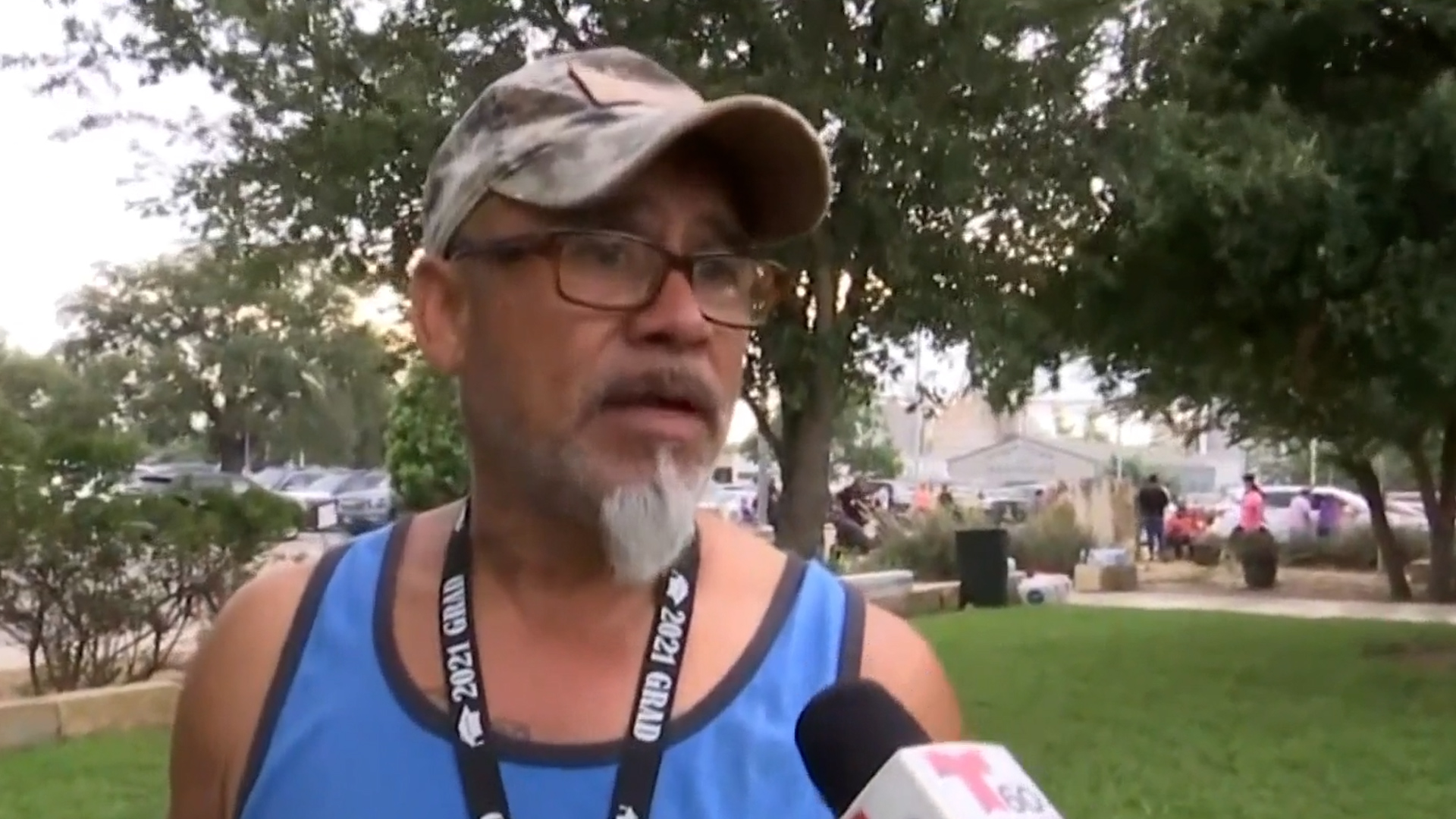 ‘I'm About to Explode': Uvalde Dad Desperate to Find Daughter

Tuesday's attack in the heavily Latino town of Uvalde was the deadliest shooting at a U.S. school since a gunman killed 20 children and six adults at Sandy Hook Elementary in Newtown, Connecticut, in December 2012.

Families in Uvalde waited hours for word on their children. At the town civic center where some gathered Tuesday night, the silence was broken repeatedly by screams and wails. “No! Please, no!” one man yelled as he embraced another man. On Wednesday morning, volunteers were seen arriving with Bibles and therapy dogs.

Adolfo Cruz, a 69-year-old air conditioning repairman, was still outside the school as the sun set, seeking word on his 10-year-old great-granddaughter, Eliajha Cruz Torres.

He drove to the scene after receiving a terrifying call from his daughter shortly following the first reports of the shooting. He said other relatives were at the hospital and the civic center.

Waiting, he said, was the heaviest moment of his life.

The attack was the latest grim moment for a country scarred by a string of massacres, coming just 10 days after a deadly, racist rampage at a Buffalo, New York, supermarket. And the prospects for any reform of the nation’s gun regulations seemed as dim, if not dimmer, than in the aftermath of the Sandy Hook deaths.

But President Joe Biden appeared ready for a fight, calling for new gun restrictions in an address to the nation hours after the attack.

It was not immediately clear how many people in all were wounded, but Uvalde Police Chief Pete Arredondo said there were “several injuries.” State Sen. Roland Gutierrez told the Associated Press Tuesday night that three people injured in the shooting remain in serious condition.

Staff members in scrubs and devastated victims’ relatives could be seen weeping as they walked out of Uvalde Memorial Hospital, which said 13 children were taken there. Another hospital reported a 66-year-old woman was in critical condition.

A motive was not yet clear, but Gov. Greg Abbott identified the assailant as Salvador Ramos, a resident of the community about 85 miles west of San Antonio. Law enforcement officials said he acted alone.

The gunman had hinted on social media that an attack could be coming, suggesting that “kids should watch out,” according to Gutierrez, who said he had been briefed by state police. He legally bought two AR-style rifles just days before the attack, soon after his 18th birthday, Gutierrez added.

One of the guns was purchased at a federally licensed dealer in the Uvalde area on May 17, according to Sen. John Whitmire. The shooter bought 375 rounds of ammunition the next day, then purchased the second rifle on May 20.

Officers found one of the rifles in the gunman's truck, the other in the school, according to the briefing. The shooter was wearing a tactical vest, but it had no hardened body-armor plates inside, lawmakers were told. He also dropped a backpack containing several magazines full of ammunition near the school entrance.

Before the attack, the suspect shot and wounded his grandmother, then fled the scene, crashing his truck near the school and entering the building, authorities said. Inside the barricaded classroom, he "just began shooting anyone that was in his way," Olivarez said.

A tactical team forced its way into the classroom and was met with gunfire, but shot and killed him, according to Olivarez.

“I just want to find her well and alive,” said Jesse Rodriguez, the father of a Robb Elementary School student. “She’s a baby. She’s 10. She’s innocent.” Rodriguez told Telemundo San Antonio that he had not been able to find his daughter, Annabelle, at any of the nearby hospitals since the shooting happened.

Earlier, a law enforcement official said one Border Patrol agent who was working nearby when the shooting began rushed into the school without waiting for backup and shot and killed the gunman.

The agent was wounded but able to walk out of the school, the law enforcement official said.

Jason Owens, a top regional official with the Border Patrol, said some area agents have children at Robb Elementary.

“It hit home for everybody,” he said.

Staff members in scrubs and devastated victims’ relatives could be seen weeping as they left Uvalde Memorial Hospital, which many of the children were taken. Three children and an adult were being treated at a San Antonio hospital, where two of them — a 66-year-old woman and 10-year-old girl — were reported in serious condition.

Uvalde, home to about 16,000 people, is about 75 miles from the Mexican border. Robb Elementary, which has nearly 600 students in second, third and fourth grades, is a single-story brick structure in a mostly residential neighborhood of modest homes.

The attack came as the school was counting down to the last days of the school year with a series of themed days. Tuesday was to be “Footloose and Fancy,” with students wearing nice outfits.

The father of an 8-year-old boy who survived a deadly mass shooting at Robb Elementary School in Uvalde, Texas, talked with NBC's Kerry Sanders about the experience.

Condolences poured in from leaders around the world. Pope Francis pleaded that it was time say "'enough’ to the indiscriminate trade of weapons!” Foreign Minister Dmytro Kuleba of Ukraine, which is at war with Russia after Moscow invaded, said that his nation also knows “the pain of losing innocent young lives.”

The tragedy in Uvalde was the deadliest school shooting in Texas history, and it added to a grim tally in the state, which has been the site of some of the deadliest shootings in the U.S. over the past five years.

In 2018, a gunman fatally shot 10 people at Santa Fe High School in the Houston area. A year before that, a gunman at a Texas church killed more than two dozen people during a Sunday service in the small town of Sutherland Springs. In 2019, another gunman at a Walmart in El Paso killed 23 people in a racist attack targeting Hispanics.

The shooting came days before the National Rifle Association annual convention was set to begin in Houston. Abbott and both of Texas’ U.S. senators were among elected Republican officials who were the scheduled speakers at a Friday leadership forum sponsored by the NRA’s lobbying arm.

Abbott, who is up for reelection in November, said the shooting in Uvalde was carried out “horrifically, incomprehensibly” on children. He did not immediately say how or whether Texas would respond to this latest mass shooting on a policy level, but since he became governor in 2015, the state has only gotten more relaxed when it comes to gun laws.

Texas Governor Greg Abbott discusses the shooting at a Texas elementary school that left at least 14 students and 1 teacher dead.

Exactly one year before the Uvalde shooting, the GOP-controlled Legislature voted to remove one of the last major gun restrictions in Texas: required licenses, background checks and training for the nearly 1.6 million registered handgun owners in the state at the time.

Abbott signed the measure, which came at the end of what was the Texas Legislature's first chance to act after the Walmart attack.

In the years since Sandy Hook, the gun control debate in Congress has waxed and waned. Efforts by lawmakers to change U.S. gun policies in any significant way have consistently faced roadblocks from Republicans and the influence of outside groups such as the NRA.

A year after Sandy Hook, Sens. Joe Manchin, a West Virginia Democrat, and Patrick J. Toomey, a Pennsylvania Republican, negotiated a bipartisan proposal to expand the nation’s background check system. But the measure failed in a Senate vote, without enough support to clear a 60-vote filibuster hurdle.

Last year, the House passed two bills to expand background checks on firearms purchases. One bill would have closed a loophole for private and online sales. The other would have extended the background check review period. Both languished in the 50-50 Senate, where Democrats need at least 10 Republican votes to overcome objections from a filibuster.

Sen. Chris Murphy, D-Conn., delivered a fiery speech on the Senate floor, lambasting colleagues over inaction gun control. “Why do you spend all this time running for the United States Senate...if your answer is, as the slaughter increases, as our kids run for their lives—we do nothing?”
The Associated Press/NBC