Trump Supporters, Other Passengers Get Into Shouting Match on Flight From Dallas to DC

Supporters of President Donald Trump got into an angry shouting match with other passengers on a Washington-bound American Airlines plane after they projected a “Trump 2020” logo on the cabin ceiling and walls.

The Trump supporters said a passenger threatened to kill them, and there was yelling back and forth. A flight attendant intervened, telling one passenger in the aisle to sit down.

The scene was posted on Twitter by Maranie Staab, a Portland, Oregon-based independent journalist who says on her website that she focuses on human rights and social-justice issues. 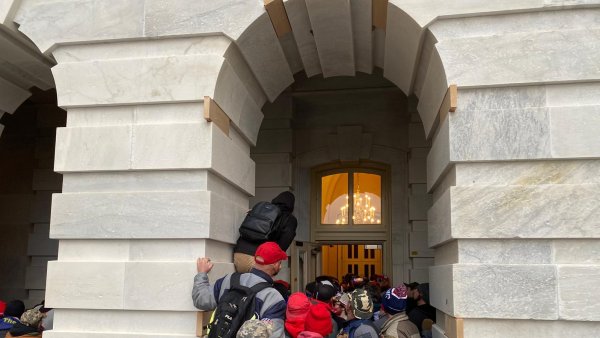 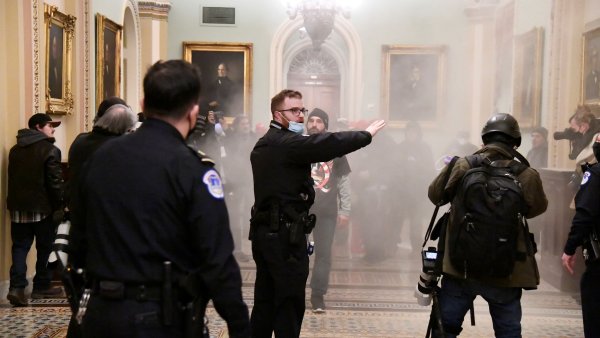 “Our team is reviewing this incident," said American Airlines spokesman Curtis Blessing. "We applaud our outstanding crewmembers for their professionalism in de-escalating a tense onboard situation and getting our customers to their destination safely.”

American said law enforcement was not called, and that passengers deplaned and dispersed without further incident.

Trump backers from around the U.S. traveled to the nation's capital for demonstrations to protest the Electoral College vote count. The ordinarily mundane procedure of Congress certifying a new president erupted in chaos as rallygoers, egged on by Trump, stormed the U.S. Capitol and abruptly interrupted the congressional proceedings in an eerie scene that featured official warnings directing people to duck under their seats for cover and put on gas masks after tear gas was used in the Capitol Rotunda.

A Slate journalist captured the moment protesters attempted to break into the U.S. Capitol building on Wednesday by smashing the glass window panes of a door.

Republican U.S. Sen. Mitt Romney of Utah was also confronted by a group of Trump supporters at the airport in Salt Lake City and subsequently heckled on a flight to Washington, D.C., illustrating divisions in the Republican Party between Trump loyalists and those ready to accept the results of the presidential election.

Video of a woman walking up to Romney as he worked on a computer in the Salt Lake City airport and later referring to him as a “disgusting shame” gained widespread attention online and was followed by another clip of people chanting “traitor” at him on the plane.

His counterpart, Sen. Mike Lee, is a staunch Trump supporter but called for civility after the video made the rounds.

“Harassing your political opponents on a plane is not acceptable,” he said in a tweet.

Trump, however, referenced the incident as he took a dig at Romney during a rally Wednesday, saying, “I wonder if he enjoyed his flight in last night.”