Manuel bounced back from prior disappointment to win the chaotic sprint from one end of the pool to the other in 24.29 seconds

When Simone Manuel whipped around to see the “1” beside her name, months of emotions came pouring out.

She closed her eyes, brought her hands together in prayer and struggled to hold back the tears.

Abbey Weitzeil, the woman she had just beaten, leaped over the lane rope with a huge smile — so happy for her friend that she didn't mind settling for the runner-up spot Sunday.

Everyone in the stands leaped to their feet, saluting Manuel's perseverance with an ovation that rocked the Omaha arena.

Days after revealing she was diagnosed with overtraining syndrome, Manuel provided the most stirring moment of the entire U.S. Olympic swimming trials on its final night by winning the chaotic 50-meter freestyle.

It was all or nothing for Manuel, whose Olympic hopes came down to one hectic dash from one end of the pool to the other.

She got there first, locking up a trip to Tokyo and the chance to make more history — five years becoming the first Black woman to win a gold medal in an individual swimming event.

While Manuel is heading back to the Olympics, Nathan Adrian's bid for a fourth appearance at the Summer Games came up just short when he finished third in the men's 50 free.

Caeleb Dressel tied his American record with another dominating performance, touching about a half-body length ahead of Michael Andrew in 21.04 seconds.

Get ready, Tokyo. Dressel will have three individual races at the Olympics, not to mention at least three relays.

Plenty of chances to live up the hype as America's next great men's swimming star after the retirement of Michael Phelps.

Olympic swimmer Caeleb Dressel took home two gold medals from Rio in 2016. Dressel explains how his philosophy of being one with his environment helps him excel.

“This is brutal, the pressure. I like it,” Dressel said. “I'm happy we executed well and in a month we get to go have some more fun.”

Andrew earned his third individual event at the Olympics by touching second in 21.48, while Adrian was next at 21.73.

Dressel hopped on the lane rope and splashed the water, while a gracious Adrian came over to congratulate the winner.

The 32-year-old Adrian beat testicular cancer and arrived at Omaha as a new father. He hoped to cap the tumultuous journey with a fourth Olympics, but the eight-time medalist failed to qualify for the final of the 100 free and wasn't quite fast enough over one lap, either.

He was eager to see his 4-month-old daughter, Parker.

“My heart kind of explodes just thinking about it,” Adrian said. “I'm so excited go hang out with her and hold her. I've got a lot to look forward to when I get home.”

Sport climbing will be making its Olympic debut in Tokyo this year. Rutledge Wood previews the new Olympic sport alongside Olympian Brooke Raboutou.

Bobby Finke won the final event of the trials, romping to victory in the 1,500 freestyle in 14 minutes, 46.06 seconds. He was about a half-pool length ahead of runner-up Michael Brinegar, who touched in 15:00.87 and also is Tokyo-bound.

Finke doubled up his Olympic racing schedule after previously winning the 800 free, posting a career best and the fourth-fastest time in the world this year in the 1,500.

“That time means a lot,” he said. “I’ve been waiting to drop in that race for a couple of years now. I’m going to go to Tokyo and try to improve my time.”

But this night was all about Manuel.

Her dreams were seemingly dashed when she failed to even qualify for the final of the 100 free, the event she won at Rio de Janeiro in 2016.

After that disappointing performance, she opened up about the struggles she's been going through. With her body aching, Manuel was diagnosed in March with the condition commonly known as burnout, forcing her to suspend training for three weeks.

At the 2016 Olympics in Rio de Janeiro, Katie Ledecky established herself as the new face of USA Swimming at 18 years old. Now, she's back following a successful college career at Stanford and is poised to dominate another Olympic games this summer in Tokyo, Japan.

The layoff came at the worst possible time, with the Olympic trials right around the corner, and Manuel was clearly not at her best in her first event of the week.

As it turned out, opening up about her condition — and receiving so much support and encouragement from teammates, fans and people she's never met — seemed to be greatest salve.

“I definitely think sharing that information allowed me to swim more free,” Manuel said. “I have a lot of hard work in the bank."

It paid off when Manuel furiously covered the length of the pool in 24.29 to edge Weitzeil by one-hundredth of a second.

Weitzeil had already had locked up her spot on the team with a victory in the 100 free, and the second-place showing ensured she'll also swim the 50 in Tokyo. 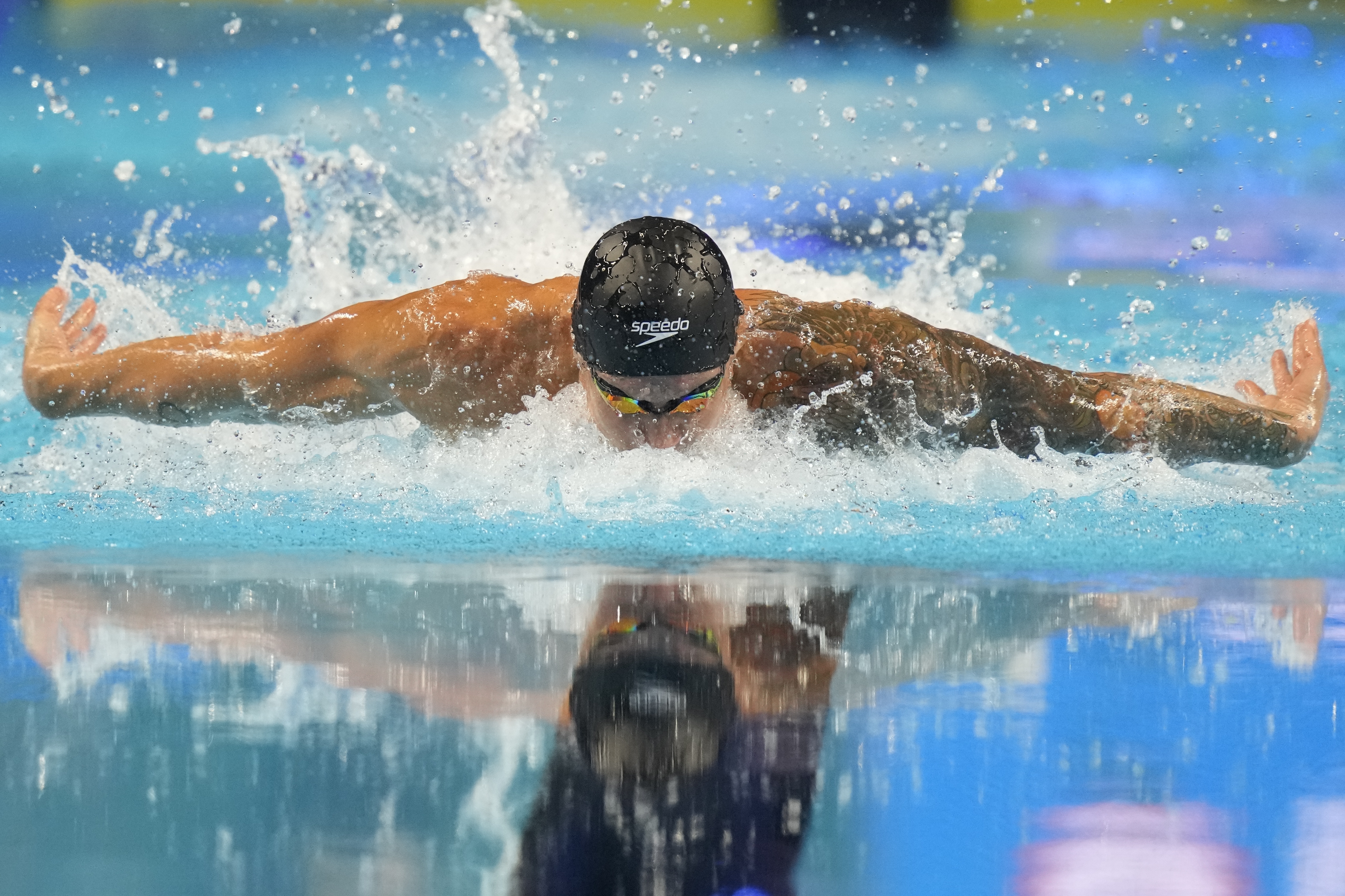 Night of the Stars: Dressel, Ledecky Keep Winning at Trials 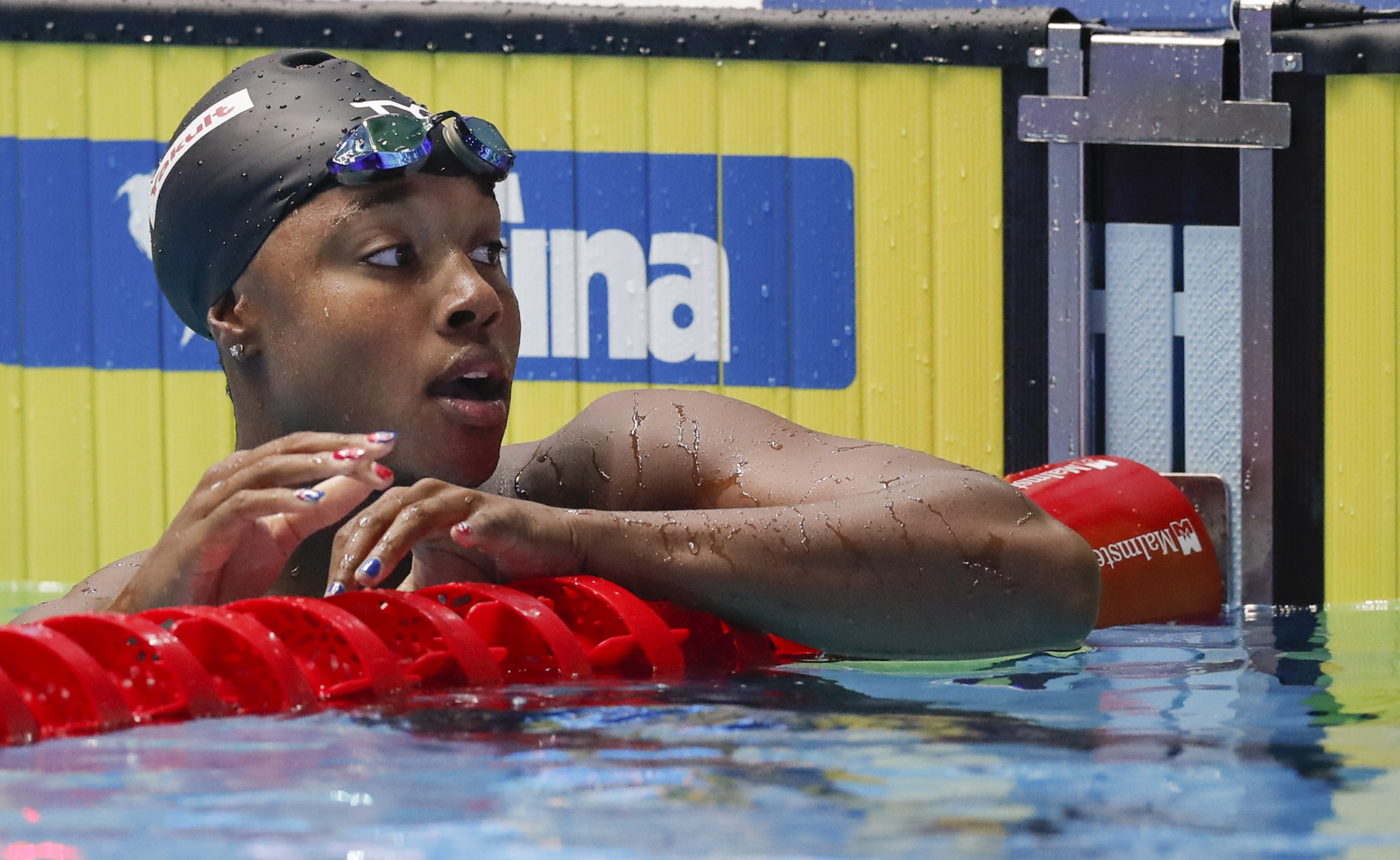 EXPLAINER: What Is Overtraining Syndrome in Sports?

No one in the arena was pulling harder for Manuel than the woman swimming in the lane right next to her.

“I told her before we walked out, ‘We’re coming out together,'" Weitzeil said. “During the race, I saw her right there. I was like, ‘Yes! Let’s go! C'mon!' That's what I was thinking the whole time.”

Manuel can't wait to get to another Olympics. She won't get a chance to defend her groundbreaking title from Rio, but she's got no complaints after the past few months.

“Even though I didn’t make it in the 100, my goal was to make to the team,” he said. “I'll have to regroup and hopefully swim faster so I can win a medal for Team USA.

"I'm glad I can walk away with my head held high.”