Instead of concluding the Triple Crown, the Belmont is kicking off the series

It's been 17 years since Jack Knowlton and his Sackatoga Stable pals rode yellow school buses to the Belmont Stakes. It was a rollicking party on wheels for the group that came to watch their colt Funny Cide try to sweep the Triple Crown.

It didn't happen that day.

Now, the ownership group that buys just one or two New York-bred colts a year is back to try again with Tiz the Law. He’s the star of a 10-horse field for the Belmont on Saturday, perhaps the biggest event in U.S. sports since the coronavirus pandemic shut down competition in mid-March.

“I still wake up and kind of pinch myself and say it looks like lightning really has struck twice,” Knowlton said.

Tiz the Law is the early 6-5 favorite for the Belmont, which kicks off what Knowlton calls a “backwards Triple Crown.” Instead of completing the series of three races run over five weeks, the Belmont is getting things started for the first time. The Kentucky Derby follows on Sept. 5, with the Preakness finishing up on Oct. 3.

The Belmont Jewel is the official drink of the Belmont Stakes. Here's how to make one.

Catch all the excitement of the Triple Crown of Horse Racing 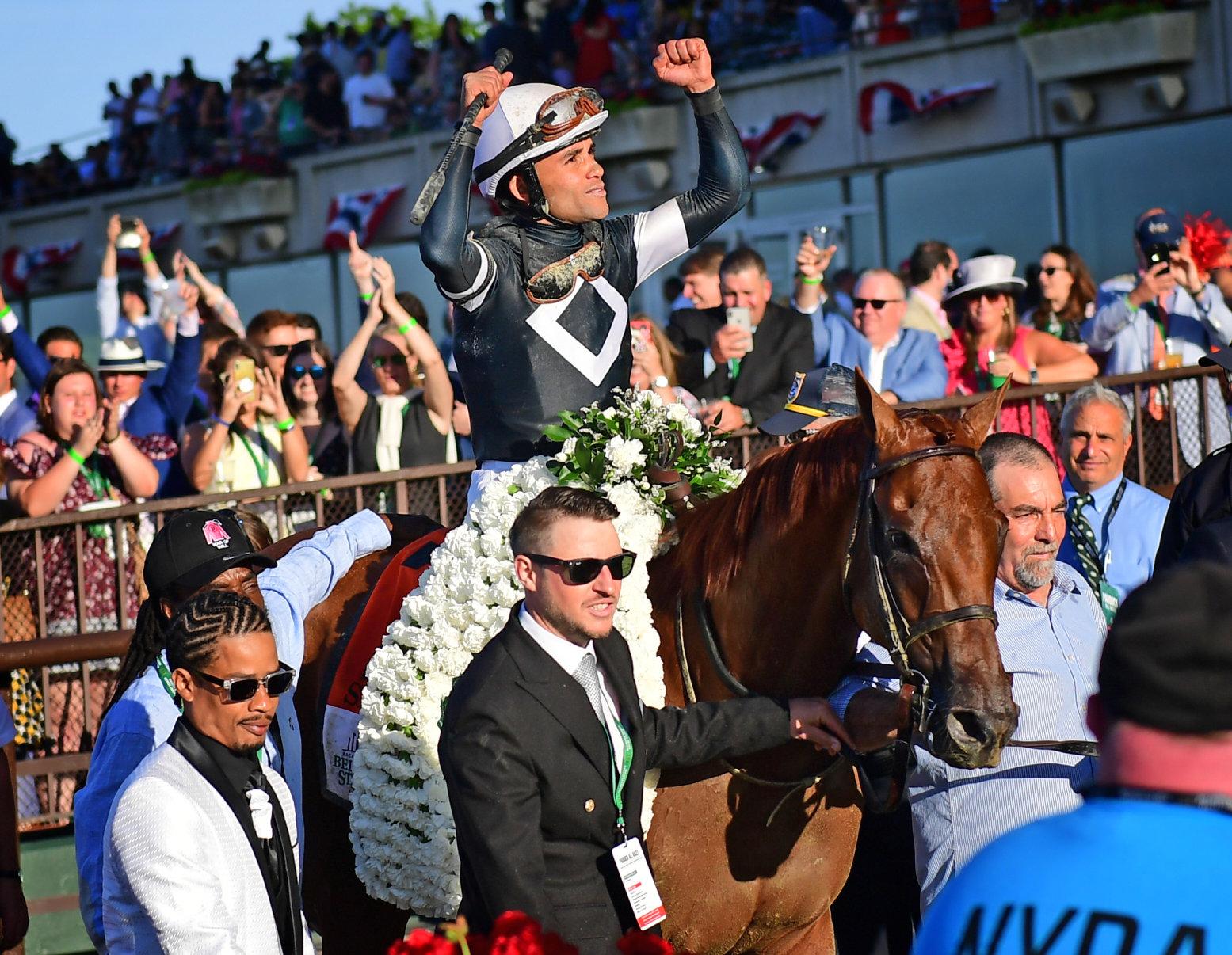 Tiz the Law is the only horse in the race with Grade 1 stakes victories. He'll try to buck history as the first New York-bred in 138 years to win the $1 million race. His 82-year-old trainer, Barclay Tagg, is chasing a win that eluded him in 2003 after Funny Cide won the Kentucky Derby and Preakness only to lose his Triple Crown bid in the Belmont.

“Tiz The Law has been the best 3-year-old since January basically, and he remains that,” retired Hall of Fame jockey Jerry Bailey said. “He would have been favored in whatever Triple Crown race we ran first, so we have a superstar that we’re going to see on Saturday.”

This Belmont — rescheduled from June 6 — will be run at 1 1/8 miles, the first time since 1925 it won’t be its usual grueling 1 1/2 miles. The top four finishers earn Kentucky Derby qualifying points, including 150 to the winner.

“He’s a versatile horse. He can be there on the pace or sit off, so I can do whatever I want,” Tiz the Law's jockey Manny Franco said. “He’s run here before and won and I think he likes the track, so that’s to our advantage.”

Rival trainer Mark Casse said, “If you beat him, you win.”

Casse saddles 6-1 shot Tap It to Win, trying to become the first trainer to win back-to-back in 24 years after taking last year’s Belmont with Sir Winston. Linda Rice oversees 15-1 shot Max Player. No woman has trained the winner of a Triple Crown race. Sole Volante is the early 9-2 second choice coming off a quick 10-day layoff. Dr Post is the 5-1 third choice in the wagering.

The date and distance aren't the only things different about this Belmont. Adhering to dramatically new rules caused by COVID-19 means no owners or fans are allowed at the sprawling track that usually caps attendance at 90,000.

Knowlton hasn’t seen Tiz the Law race in person since Feb. 3 in Florida because of the pandemic. Undeterred, he and his group plan to watch on a restaurant patio in upstate Saratoga Springs.

“There is always a Sackatoga party in some way, shape or form,” Knowlton said.

There's no Charlatan, Honor A. P., Maxfield or Nadal in the field because of injuries and sudden retirement. No Bob Baffert, the white-haired trainer of undefeated Charlatan and Nadal.

“In many ways I felt the Belmont was going to be the Kentucky Derby, the first time the best horses in training were going to be meeting each other,” Knowlton said. “Clearly, with Bob’s two horses and Maxfield out, there isn’t quite the star power we all expected.”

Without Baffert, fellow Hall of Famers Steve Asmussen, Casse, Bill Mott and Todd Pletcher will saddle half the field.

“It’s going to be a far different scene for sure,” Pletcher said. “It’s sad in some ways, but we’re grateful we’re getting an opportunity to run.”

NBC Sports is calling several audibles on its coverage. The network is using seven cameras instead of its usual 25, augmented by cameras from the New York Racing Association. Three jockeys will wear mics to enhance the racing sounds on a broadcast lacking crowd noise.

Larry Collmus will call the race from a platform in the third-floor grandstand, about 40 feet below his usual glass-enclosed perch.

The network has 50 people on-site rather than the 200 who worked last year, including Collmus and reporters Kenny Rice and Britney Eurton doing roaming interviews with boom mics from a social distance of 6 feet.

Host Mike Tirico and analyst Randy Moss will work from studios in Stamford, Connecticut. Bailey will check in from his Florida home, while Eddie Olczyk handicaps the race from his basement in Chicago.

With all the changes for horses and humans, Tiz the Law remains a calming presence.

“He seems to be the kind of horse that takes everything in stride,” Knowlton said.