Explainer: What is an Atmospheric River and How Does It Affect Drought in California?

Invisible rivers in the Earth's atmosphere move up to 25 times more water in a day than the Mississippi River.

California's historic severe drought, which is now entering its third year, is the latest dry spell to plague the nation's most populous state.

But this week, a parched California is finally seeing some real rain -- thanks to what's known as an atmospheric river. Storms tap into this river in the sky over the Pacific Ocean, resulting in some of the wettest winters on record in a state plagued by dry spells.

Atmospheric rivers get talked about a lot as California heads into its wetter months each year, but what exactly are they?

What is an atmospheric river?

As NBC4 meteorologist David Biggar explains, "There's a lot happening in the atmosphere that you can't see with your eyes."

Atmospheric rivers are long, powerful portions of the atmosphere that carry lots of water from the tropical regions near the Earth's equator towards the poles.

They're invisible to the naked eye -- the water is moved over the ocean in the form of water vapor, not a "river" in the way we think of them on land. They tend to move through the atmosphere in streams between 250 and 375 miles wide.

"That seems like a lot, but it's really only about the distance between LA and San Francisco," Biggar said.

That stretch moves an astonishing amount of water. Just one atmospheric river can move an average of 10.5 trillion gallons of water per day.

The strongest atmospheric rivers can move anywhere between seven and 25 times as much water as the flow of the Mississippi River, which is the second longest river in North America and has a watershed that reaches 32 states, according to the national park service. 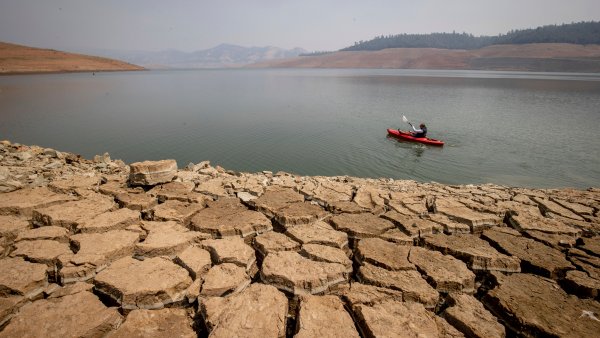 According to the National Oceanic and Atmospheric Administration, atmospheric rivers "are a primary feature in the entire global water supply and flood risks, particularly in the western U.S."

How do atmospheric rivers form?

A view of the Earth using a water vapor satellite shows that moisture in the atmosphere is concentrated over the equator.

Temperatures at the equator tend to run hotter, and just like in grade-school science lessons, hotter temperatures cause water to evaporate into the atmosphere. Warmer air can also hold more water vapor.

The circulation of the atmosphere will pull streams of moisture away from the equator forming “atmospheric rivers.” These “rivers” of moisture can be pushed towards land by weather systems.

Atmospheric rivers play a major role in California’s rain season. 25-50% of our state’s annual precipitation is produced by atmospheric rivers. Rain and snow amounts can vary widely depending on the exact location, timing and moisture content.

Why are storms fueled by atmospheric rivers so powerful?

Atmospheric rivers form and move fairly close to the surface of the earth.

"All this moisture is really low in the atmosphere," Biggar said. "It's down below about 10,000 feet."

In contrast, planes spend most of their time travelling at altitudes of 30,000 feet or higher.

This means that, once atmospheric rivers reach land, especially the coastal mountains in California, they move up in altitude from their starting point as they travel.

As the water vapor that makes up the rivers moves up, it cools with the temperature of the atmosphere, turning into water droplets and -- eventually -- lots and lots of precipitation.

What does this have to do with California's drought?

Atmospheric rivers come in all shapes and sizes around the globe, and while some tend to point in a mostly consistent direction -- there's one that, according to NOAA, generally comes in from Hawaii and moves towards the West Coast of the U.S. -- they do get moved around with the winds like other weather phenomena.

This upcoming weekend, for example, will start with an atmospheric river pointed at northern and central California. Scattered clouds will make their way into the SoCal area while other parts see up to 7 inches of rain.

But as the atmospheric river moves south, the storm will bring more and more rain to our area. That's if they move as predicted, which can be difficult.

"Now the one note with atmospheric rivers is, because they're kind of narrow, and they're very dependent on the moisture coming in off the Pacific, any slight shift in position or timing could have a big impact on how much rainfall we're looking at," Biggar said.

And when the drought conditions are so severe, that change in impact gets noticed.