All evacuation orders and warning were lifted as of 5 p.m. Wednesday, according to the California Department of Forestry and Fire Protection, also known as CAL FIRE.

The Blue Ridge Fire burning in Yorba Linda has destroyed a structure, damaged seven others, burned 14,334 acres and was 23% contained early Thursday morning as evacuated residents were being allowed to return home.

All evacuation orders and warning were lifted as of 5 p.m. Wednesday, according to the California Department of Forestry and Fire Protection, also known as CAL FIRE. 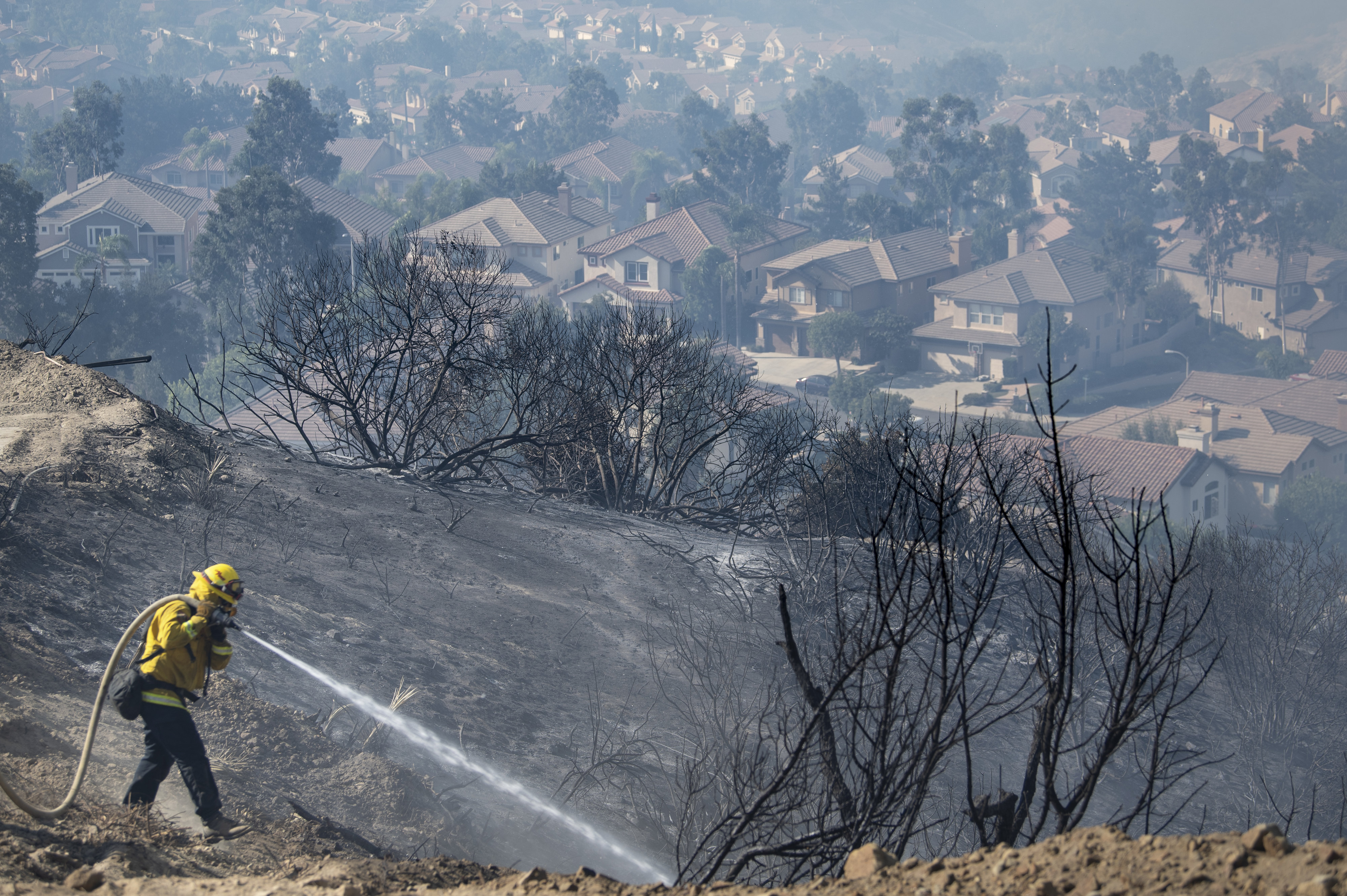 90,000 Residents Ordered to Evacuate in Silverado Fire Are Now Allowed Back Home 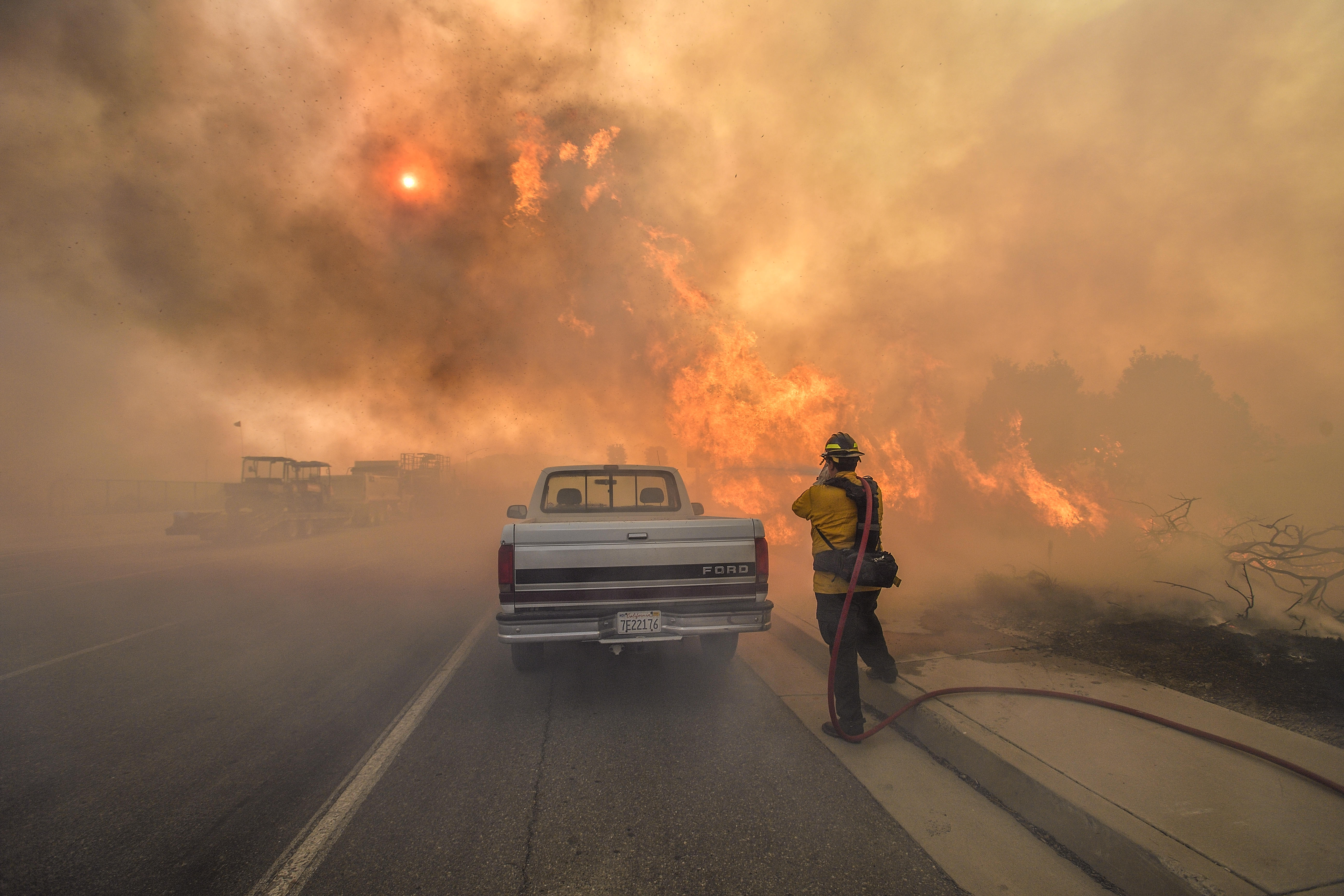 "Fire spread has slowed due to the decrease in winds and (increase in) humidity over the fire area," CAL FIRE said in a statement. "Firefighters continue to make progress constructing direct handline and working perimeter control."

Crews will be monitoring the fire line throughout the morning, mopping up hot spots, the statement said.

High winds, which grounded firefighting aircraft on Monday, were much less of a factor on Wednesday.

"The winds we've had today were very calm," said Firefighter Edwin Zuniga, a spokesman for the California Department of Forestry and Fire Protection, also known as CAL FIRE. "I haven't seen a big push. It's a light breeze, but nothing significant."

Charred hillsides show how close the Blue Ridge Fire came to some houses in Chino Hills. Christine Kim reports for the NBC4 News at 11 a.m. on Wednesday Oct. 28, 2020

Firefighters are not engaged in any active fire fronts, Zuniga said.

"That tells us the fire activity is very minimal," Zuniga said.

Some roads in the area have started to reopen -- one of two lanes will be open on southbound 71 Freeway while crews fix a fire damaged guardrail. Repairs are expected to be completed by 4 p.m. Thursday.

Traffic was also being allowed on the 91 Freeway connectors to the Corona Freeway, a Caltrans spokesperson said.

The estimation of burned acreage was lowered Tuesday night from about 15,200, according to Orange County Fire Authority spokesman Steve Concialdi. As of Wednesday morning, there was still no word on the cause of the fire.

Travis Wylie, a 36-year-old captain with CAL FIRE out of San Bernardino, told City News Service the fire was "very active," saying crews started to get a handle on flames around 3 a.m. Wednesday, when the Santa Ana winds started to die down. "With the fuel moistures and everything, it's kind of burning erratic. The fuel moistures are really low."

The brush fire, initially called the Green Fire, was reported at 12:55 p.m. Monday next to the Green River Golf Club, off of Green River Road and the Riverside Freeway in Corona, according to the Corona Fire Department.

The head of the fire entered Orange County about 1:20 p.m. Monday, and the flames raced toward Yorba Linda, posing a threat to scores of residences

A grant from the Federal Emergency Management Agency was secured Monday by Gov. Gavin Newsom, which will assist local and state agencies responding to the fire to apply for 75% reimbursement of their eligible firefighting costs.

Orange County Board of Supervisors Chairwoman Michelle Steel signed an emergency declaration Tuesday and asked Newsom to sign one as well for the county to free up more funding.

Because of the wildfires, the Santa Ana Zoo was sheltering about 150 animals from the Orange County Zoo, located in Irvine Regional Park.

Animals were also being sheltered at the OC Fair and Events Center in Costa Mesa and at the Los Alamitos Race Course in Cypress.

The Blue Ridge fire is one of two major fires burning in Orange County. The Silverado Fire, which left two firefighters hospitalized with severe burns, grew to 13,390 acres with containment at 32%.Thousands of Irvine residents evacuated due to the Silverado Fire were back home early Thursday morning.