About 1,000 Topanga Canyon-area residents who were evacuated due to the Pacific Palisades brush fire are being allowed to return home, with the blaze 23 percent contained and holding at 1,325 acres, officials said Tuesday.

As of Monday night, Topanga Canyon Boulevard was reopened to residents, who should be prepared to show ID or a Topanga access card for entry, fire officials said.

No changes were made yet to an evacuation warning issued Sunday in the city of Los Angeles for all homes north of Chastain Parkway in the 1500 block to Calle Del Cielo. The warning area includes Calle De Sarah, Calle Bellevista and all homes west of Calle Del Cielo and Ave Ashley up to the hills. That means residents should be ready to leave if ordered.

Meanwhile, officials also said Monday that a suspected arsonist was in custody in connection with the fire.

Authorities have identified the person arrested for allegedly starting the brush fire in Pacific Palisades as Ramon Santos Rodriguez, 48, who was booked on suspicion of arson, according to the Los Angeles Police Department. Rodriguez, arrested on Sunday, was being held on $75,000 bail.

Los Angeles Fire Department arson investigators and Los Angeles police had detained two people in connection with the fire, and one was questioned and released Saturday night. The other person was interviewed on Sunday and was then arrested, LAFD Chief Ralph Terrazas said at Monday morning briefing.

"Regarding the cause, it is labeled suspicious," Terrazas said. "The LAFD Arson Counterterrorism Section, along with LAPD, have aggressively pursued all tips and all leads. I want to have a special thank you to the community that provided us those tips and leads. We have to work together as a community. This problem is so significant in terms of major brush fires."

"We count on those tips coming in, and then we vet the tips and we pursue investigations," Terrazas said. "And I'm happy to say that we did detain one person and released them and determined that the first person was not a suspect. The second person was arrested yesterday at 2:30 p.m. and is in custody. It is in an active investigation. I cannot give you any more details than that, but the person in custody we feel we have the right person."

According to Los Angeles Mayor Eric Garcetti, the suspected arsonist "is getting medical treatment right now."

The man who was detained and released Saturday night had his photo published by the Citizen personal safety app along with a $30,000 reward offer for the suspect's arrest, but it turns out he was not the suspect police were looking for, according to multiple media reports.

An LAPD helicopter pilot saw a suspect setting fires on Friday, law enforcement and firefighting officials told the Los Angeles Times. But when the man identified on the app was detained by Los Angeles County sheriff's officials Saturday, it was determined that he was not the same person observed by the helicopter pilot, the newspaper reported.

"We publicly posted the photo and offered a cash reward for information without formal coordination with the appropriate agencies. Once we realized this error, we immediately retracted the photo and reward offer," Citizen said, according to the Times. "We are actively working to improve our internal processes to ensure this does not occur again. This was a mistake we are taking very seriously."

Terrazas said no structures have been lost in the fire and the only injury as of Monday morning has been a "minor eye injury" to a firefighter.

About 450 firefighters were assigned to battle the flames. They were being aided by multiple water-dropping helicopters and three fixed-wing retardant-dropping aircraft, which were put into service when weather conditions improved for flying Monday afternoon.

The mayor noted the "challenging terrain."

"As you've heard, this is about 75 years since we've had a fire there. Some of the brush is 20 to 30 feet high," he said. "We feel good in the northwest of this fire and the far southwest, but in kind of west-southwest towards Topanga Canyon (the goal) is to make sure that we can build that line and hold that line." 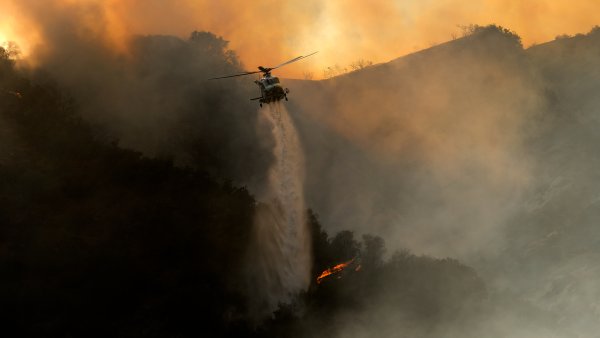 The fire began about 10 p.m. Friday in a hard-to-access canyon area in a remote area off Michael Lane and Palisades Court, the LAFD reported.

"By 6:30 a.m. on Saturday … fire was estimated at 15 acres," Terrazas said. "Unfortunately, by 4:30 p.m., an additional burn area emerged north of the original fire. Within about one hour, the fire grew to 750 acres. By 1 p.m. (Sunday) … the fire was estimated at 1,325 acres with zero percent containment. We do anticipate being on scene for the next several days until we achieve 100 percent containment."

Topanga Elementary Charter School, at 22075 Topanga School Road, remained closed Tuesday due to air quality and safety concerns caused by the Palisades fire, according to the school's website. Child supervision was not available but remote learning was underway.

Meanwhile, air-quality officials extended a smoke advisory through Tuesday afternoon due to large amounts of smoke billowing near homes in the area and advised those who smell smoke or see ash to limit exposure by remaining indoors with windows and doors closed and avoiding vigorous physical activity. 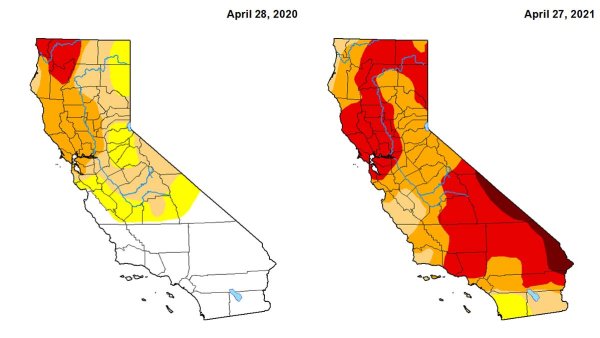 Map: See Where Drought Conditions Have Expanded in California

Topanga Canyon Boulevard was closed in both directions to all but residents between Mulholland Drive and Pacific Coast Highway. The right lane of southbound PCH was also closed between Temescal Canyon Road and Chataqua Boulevard.