The Palisades Fire was 84% contained Friday evening after burning more than 1,202 acres.

The fire in rugged terrain was 66% contained on Wednesday.

No structures have been lost, and the only injury has been a minor eye injury to a firefighter, LAFD Chief Ralph Terrazas said. About 370 firefighters were assigned to the fire lines. Crews on the ground were aided by three water-dropping helicopters.

The LAFD was in a unified command with the Los Angeles County Fire Department and Cal Fire until Wednesday morning, when the LAFD was listed as the lead agency, with the other two organizations listed as assisting agencies.

Meanwhile, Ramon Santos Rodriguez, a 48-year-old homeless man, was charged Tuesday in connection with the blaze. He faces one felony count each of arson of a structure or forest, and arson during a state of emergency.

Rodriguez pleaded not guilty and was ordered held in lieu of $350,000 bail while awaiting a June 1 hearing to determine if there is sufficient evidence to require him to stand trial.

Firefighters were sent to the 1800 block of Michael Lane to battle the flames after the fire was reported at 10 p.m. Friday, May 14. Just after midnight, LAFD arson investigators were sent to the scene to determine the origin and cause of the fire, and due to the inaccessible terrain and darkness, gathered preliminary information and returned the next day. 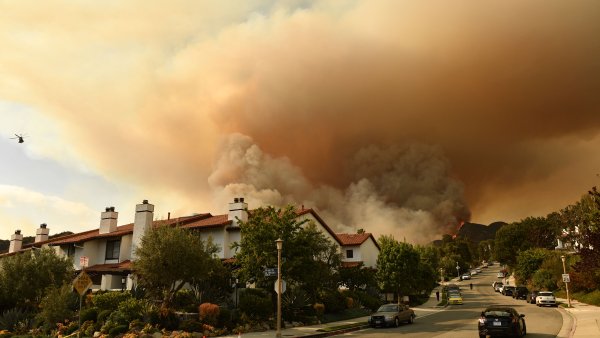 On Saturday morning, LAFD helicopter pilots saw a man moving around in the brush along a steep hillside near the fire, and a Los Angeles Police Department air patrol was dispatched to monitor him. Police officers kept watch on the ground while the LAPD Air Support Division "provided eyes in the sky," the LAFD reported.

"Deputies were lowered into the brush to begin their search," the LAFD reported. "Because the fires were growing rapidly, deputies were forced to retreat."

At about 11 a.m. Sunday, according to the LAFD, the man emerged from the brush in the 1200 block of Palisades Drive, and a "private security officer in the area recognized the person as a possible suspect and notified LAPD and LAFD, (and) police officers arrived and detained the suspect."

He was ultimately booked on suspicion of arson after receiving medical treatment, reportedly for smoke inhalation.