The county had been preparing to move from the most-restrictive purple tier to the red tier by next Wednesday, but the timetable was moved up when the state met its goal of inoculating two million Californians in underprivileged communities where coronavirus has spread more widely.

Orange County will enter the less-restrictive red tier of the state's coronavirus regulatory system at one minute after midnight Sunday morning, allowing for bigger crowds in retail stores and the reopening of museums, movie theaters and indoor dining at restaurants.

"We expected it -- it's almost anti-climactic at this point, but it's a step forward. It gives people the relief they've been waiting for," Supervisor Doug Chaffee said.

"The governor is finally changing his rules in favor of getting us back to some form of normal,'' Supervisor Don Wagner said. "Good for him. And good for the people of Orange County who have been following safety protocols and getting the vaccine to protect themselves, their friends, and family." 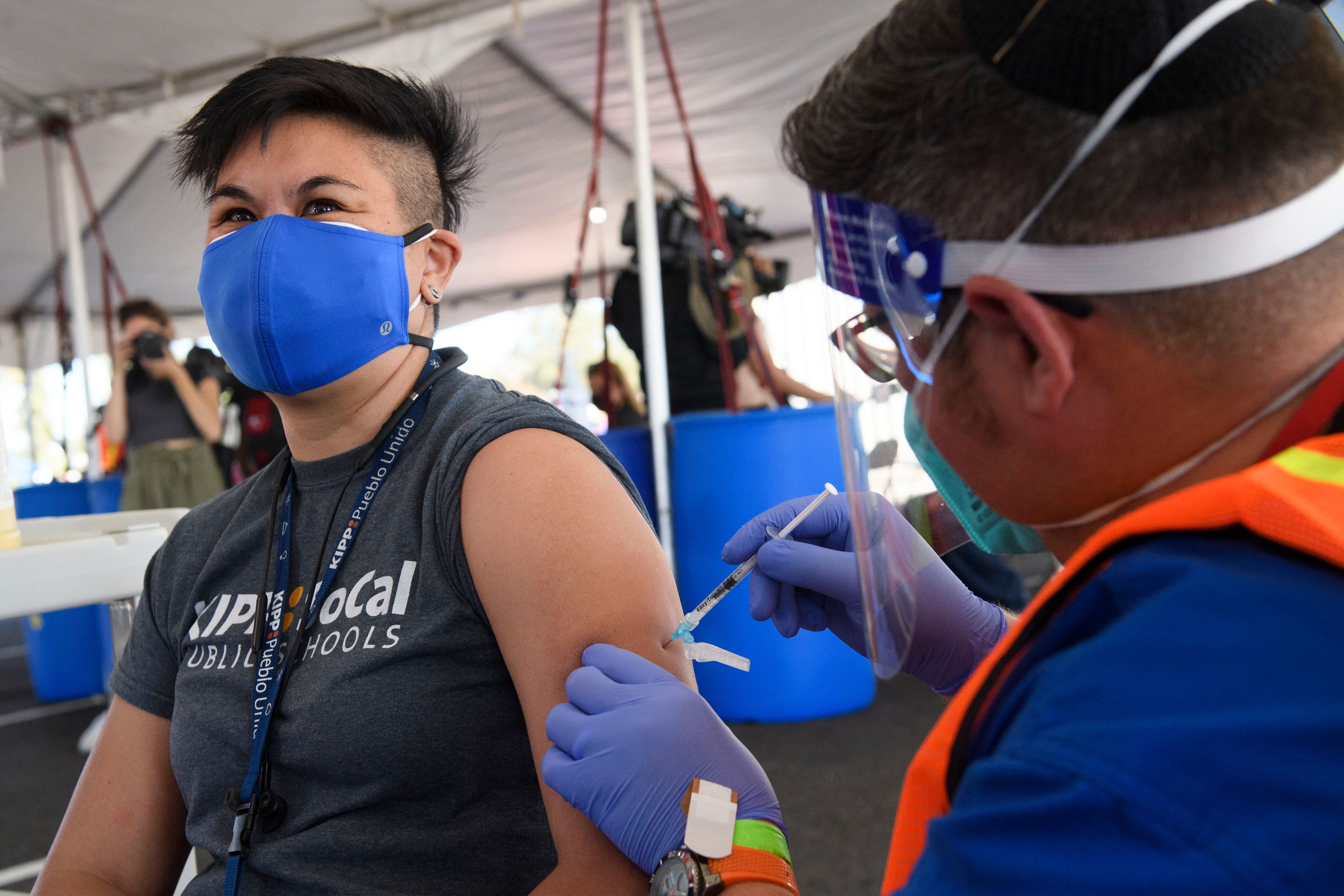 The county had been preparing to move from the most-restrictive purple tier to the red tier by next Wednesday, but the timetable was moved up when the state met its goal of inoculating two million Californians in underprivileged communities where coronavirus has spread more widely.

The county also reported 26 more COVID-19 fatalities, raising the death toll to 4,434 since the pandemic began. Death reports are often delayed for a variety of reasons.

Of the deaths reported Saturday, five were skilled nursing facility residents, raising the death toll among that group to 1,022.

On Tuesday, when the state updated its weekly numbers in the tiers network, the county's test positivity rate improved to 3.2% from 3.9% last Tuesday, and the adjusted case rate per 100,000 people on a seven-day average with a seven-day lag improved from 7.6 to 6. The county's Health Equity Quartile rate, which measures positivity in hotspots in disadvantaged communities, improved from 4.9% last week to 4.1%.

This winter storm may be on its way out, but it’s leaving behind a lot of snow in our mountains. Tony Shin reports for NBC4 News at 5 p.m. on March 12, 2021.

Under the previous standards, the county was in the red tier with case rates per 100,000 and in the orange tier for the positivity rates.

But Kim cautioned residents to keep their guard up.

"People should be careful and I think most people in Orange County are smart enough to assess their level of comfort and safety,'' he said. "For me, I intend to go visit my mom and have a meal with her, which will be great."

The red tier allows for many more businesses and organizations to reopen. For instance, retail stores can allow for half capacity instead of 25%, and museums, zoos and aquariums can reopen for indoor activities at 25% capacity, as can movie theaters, gyms and restaurants.

Wineries, breweries and distilleries can reopen for outdoor business only.

Kim said he was encouraged that Congress has approved the $1.9 trillion stimulus because it will provide much-needed funding to help pay for a $200 million budget hole created by COVID-19-related expenses. Some of those expenses will be covered by the Federal Emergency Management Agency, but the stimulus can cover the rest and also help defray expenses from future booster-shot campaigns and other expenses over the next few years, he said.

"Now I don't have to worry whether I'll have FEMA support for booster shots for next year or the year after,'' Kim said. ``We'll sit down and figure out how to appropriately budget this money over a multi-year period of time. The intent is to make sure it's available to ride out COVID for the next couple of years."

The federal funding will come with specific directions on what it can be used for, but since the county has been dipping into its general and rainy day funds to pay for testing and vaccine distribution, the stimulus will at least indirectly help the county avoid significant service cuts and layoffs, Kim said.