Police say 27-year-old Fernando Arroyos, an off-duty LAPD officer, was shot during a robbery at or near 87th and Beach streets in Florence-Firestone.

An off-duty LAPD officer was shot and killed late Monday during a robbery and exchange of gunfire in a South Los Angeles neighborhood.

Three men and two women were detained, and were being questioned in the shooting, law enforcement sources tell NBC4. Detectives said they believe the off-duty officer was shot by two of the men.

None of the five had been charged with murder, and their names were not yet released, officials said in a press release distributed later Tuesday.

One of the men was found on a street Monday night with a gunshot wound to his leg. The investigation stemming from that person led authorities to the other two men on Tuesday.

The officer was shot and killed during what authorities believe was a robbery. A procession Tuesday morning brought the officer's body to the LA County coroner's office. Toni Guinyard reports for Today in LA on Tuesday, Jan. 11, 2022.

More details about the men being detained were not immediately available.

The officer was identified as 27-year-old Fernando Arroyos by LAPD Chief Michel Moore, during Tuesday morning's police commission meeting. Arroyos, an officer with the LAPD for three years, was assigned to the Olympic division, Moore said.

Arroyos’ death was confirmed at approximately 11:37 p.m. Monday. Police said the officer was shot during a robbery at or near 87th and Beach streets in Florence-Firestone.

Deputies responded about 9:15 p.m. Monday to the 8700 block of Beach Street where they found the officer lying unresponsive in the alley with at least one gunshot wound.

According to authorities, a black pickup approached Arroyos and his girlfriend, and three people got out of the truck.

An argument ensued and Arroyos was shot, detectives said. Arroyos exchanged gunfire with at least one of the robbers, LAPD Chief Michel Moore said.

It was not immediately clear whether the attackers knew Arroyos was a law enforcement officer.

Deputies took Arroyos to a hospital where he died.

A witness said he heard several gunshots and saw the officer on the ground. The officer was with a woman who was asking for help.

The attackers left the scene in the pickup. A perimeter spanning several blocks was set up as deputies scoured the area for attackers.

Moore said authorities recovered the officer’s handgun and a firearm believed used by a participant in the crime.

"We do believe that we have an officer-involved shooting here, that our officer exchanged gunfire with at least one of these suspects," Moore said. "We do have our officer’s gun, and we have an additional weapon that we believe was responsible for this assault."

"We know that we need the community’s help, but we also have every faith and confidence that we’ll be identifying the person or persons responsible for this terrible act and this grievous loss," Moore said.

While speaking at a Tuesday morning event for the first day LA Unified students returned to campus after their winter break, Los Angeles Mayor Eric Garcetti mentioned the officer and his tragic death.

"Yesterday evening, a young police officer of the Los Angeles Police Department... was in the unincorporated areas of South Los Angeles shopping for a home," Garcetti said. "A first home, I believe, for himself and his girlfriend." 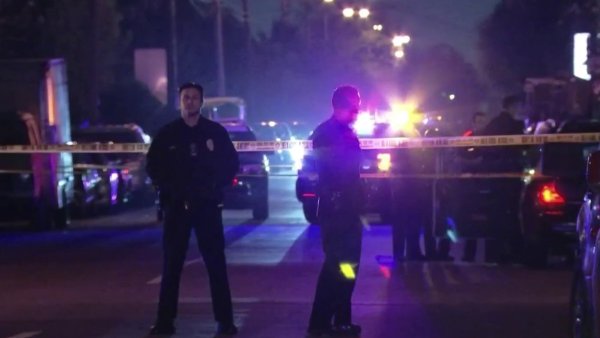 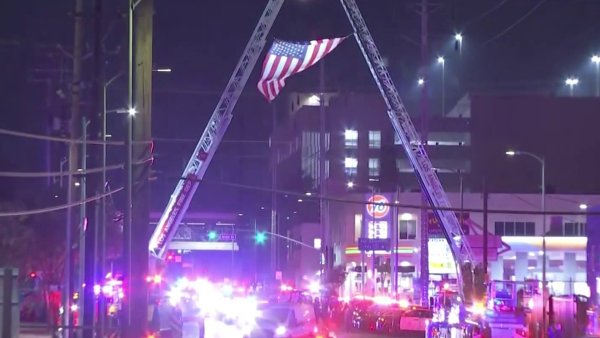 Garcetti said he spoke with the officer's mother and stepfather at the hospital where the officer died. Garcetti not identify Arroyos in his speech because at the time other next-of-kin had not yet been notified of his death.

The Los Angeles County Sheriff's Department is taking the lead on the investigation because the incident happened outside the city of Los Angeles, he said.

"This man died a hero trying to defend himself and his girlfriend," Garcetti said.