Some Evaucations Lifted in Silver Fire, State of Emergency Declared

The wildfire has consumed more than two dozen homes and injured six people, including five firefighters

California Gov. Jerry Brown has declared a state of emergency in the wake of a Riverside County wildfire that has claimed more than 18,000 acres.

The Silver Fire wildfire has consumed 25 square miles of dry, mountainous terrain in less than two days was heading east in the direction of Palm Springs Friday, as high winds posed a challenge in battle against the fire.

More than 1,630 firefighters were on scene as gusts continued to push the flames, which had prompted mandatory evacuations and worries about the fire's dangerous growth potential.

Since it broke out about 2 p.m. Wednesday in the foothills of the San Jacinto Mountains about 90 miles east of Los Angeles, the blaze has injured five firefighters and severely burned one resident.

Nearly 30 structures, most of them homes, were destroyed.

An estimated 1,800 people were told to evacuate from multiple communities, with Snow Creek Village the most recent addition, according to an online incident report.

Smoke smothered Snow Creek, where residents could see flames coming down the mountain early Friday. Longtime homeowner Donald Tousseau was one of the few who refused to evacuate the foothill community near Palm Springs.

“I’ve been through this before,” Tousseau said. “I don’t like to be a hazard or a handicap to the firemen, because I know they worry about you. But if it came to the time, and it’s really dangerous, I’d get out.” 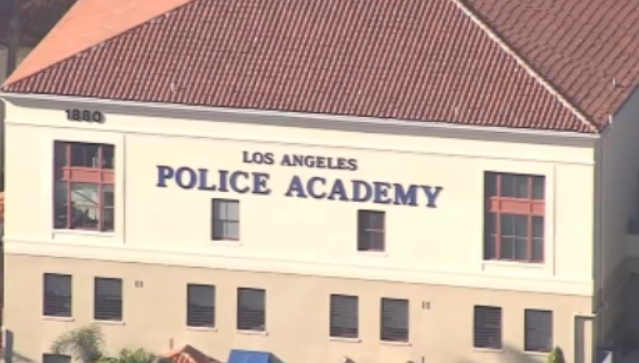 The mailboxes of those who stayed behind were tagged by authorities by yellow caution tape.

By Friday evening, the Silver Fire had burned 18,000 acres south of Banning and Cabazon, two cities along the 10 Freeway. The fire was 40 percent contained.

Winds blowing at 26 mph -- along with the rugged terrain -- were a cause for concern as the flames moved east toward the resort town of Palm Springs. Together, they make for tough conditions, fire officials said.

"They have a 40-pound pack on their back, they’re walking up into the rocky terrain that’s very steep, now you add these winds. It really is difficult to fight fire up there,” said Riverside County Fire Department Capt. Lucas Spelman.

Temperatures were expected to reach into the 90s in the region Friday.

At least 26 homes and a commercial building were destroyed, and two other structures were damaged, according to the Riverside County Fire Department.

At a Thursday afternoon news conference, Cal Fire Riverside Chief John R. Hawkins said more than 500 structures had been threatened in the blaze, which he said had moved rapidly and jumped Highway 243 soon after it was reported.

Fire official had said one resident was discovered severely burned from "head to toe" inside a travel trailer near the fire's origin at Wolfskill Truck Trail (map).

The fast-growing blaze is in the same treacherous area as the 2006 Esperanza Fire, a wildfire that killed five U.S. Forest Service firefighters, adding to the worries of those battling the flames.

Evacuation order will be lifted at 6 p.m. for Snow Creek, Cabazon, Mt. Edna and Poppet Flats, according to a tweet from the Riverside County Sheriff's Department spokesman.

Highway 243 was closed between Banning and Poppet Flats.

As the fight against the Silver Fire continued, crews fully contained the 1,383-acre Falls Fire burning about 5 miles west of Lake Elsinore.

Anywhere that residents can see or smell smoke from the wildfires was also included in the warning, according to the South Coast Air Quality Management District.

The Silver Fire broke out in an area about 20 miles north-northwest of the origin of the Mountain Fire, which burned 43 square miles last month. In that blaze, which prompted the evacuation of thousands of area residents, fire officials had warned of extremely flammable fuels due in part to a dry winter.