Biden Rebuilding ‘Blue Wall' in Race for the White House

States across the country were still counting ballots that were cast ahead of or on Election Day, and a handful of battlegrounds remained up for grabs. Trump tried to aggressively press his case in court, but with just a few key states in play, it was unclear whether the flurry of court action could have an impact on the trajectory of the race.

The president tossed off a series of tweets alleging, without evidence, electoral misconduct and pressing for vote counting to stop. In an all-caps official campaign statement, he wrongly equated the counting of ballots with improper voting.

The president's erroneous claim could further rattle a nation uneasily waiting for a winner two days after Election Day. Neither candidate had amassed the votes needed to win the White House, but Biden’s victories in Michigan and Wisconsin put him on the brink.

Biden moved to project the appearance of a president, planning to attend a COVID-19 briefing on Thursday. Trump, in contrast, remained in the White House residence, working the phones and escalating his efforts to sow doubt about the outcome of the race.

With millions of ballots yet to be tabulated, Biden already had received more than 71 million votes, the most in history. At an afternoon news conference Wednesday, the former vice president said he expected to win the presidency but stopped short of outright declaring victory.

“I will govern as an American president,” Biden said. "There will be no red states and blue states when we win. Just the United States of America.”

Democratic Candidate for President Joe Biden says he is not declaring victory over Donald Trump, but believes when the votes are all counted, he will have enough to win the election.

For four years, Democrats have been haunted by the crumbling of the blue wall, the trio of Great Lakes states — Michigan, Wisconsin and Pennsylvania — that their candidates had been able to count on every four years. But Trump’s populist appeal struck a chord with white working-class voters and he captured all three in 2016 by a combined total of just 77,000 votes.

The candidates waged a fierce fight for the states this year, with Biden’s everyman political persona resonating in blue-collar towns while his campaign also pushed to increase turnout among Black voters in cities like Detroit and Milwaukee.

Trump’s campaign engaged in a flurry of legal activity to try to improve the Republican president's chances and cast doubt on the election results, requesting a recount in Wisconsin and filing lawsuits in Pennsylvania, Michigan and Georgia. Statewide recounts in Wisconsin have historically changed the vote tally by only a few hundred votes; Biden led by more than 20,000 ballots out of nearly 3.3 million counted.

Demonstrators gathered in cities across the U.S. on Wednesday over the ongoing vote count in battleground states, but they revealed starkly different concerns over election security.

Contests in Georgia, Pennsylvania, Nevada, Arizona and North Carolina were tight with votes still being tabulated.

The Trump campaign said it was confident the president would ultimately pull out a victory in Arizona, where votes were also still being counted, including in Maricopa County, the state’s most populous area.

Trump's legal challenges faced long odds. He would have to win multiple suits in multiple states in order to stop vote counts, since more than one state was undeclared.

There were no obvious grounds for the Justice Department to attempt to intervene to stop a vote count at the state level, unless the federal government could somehow assert a violation of federal voting laws or the Constitution. The department could theoretically file a brief in support of a Trump campaign lawsuit if it believed there were federal concerns at stake, but that intervention would be extraordinary.

Trump has insisted ballot counting must stop, but it was unclear exactly what that included. Counting for votes received by Nov. 3 was continuing, but roughly 20 states allow ballots to be counted if postmarked by Nov. 3 but received in the days after. In some states that is as long as nine days, or even longer. Some of the deadline changes were made as a result of the pandemic, but others are just routine parts of state election laws. Trump has fixated on Pennsylvania, where the Supreme Court refused to stop a court’s ruling that allowed for a three-day extension.

He also said he was taking fraud claims to court – but most of the lawsuits only demand better access for campaign observers to locations where ballots are being processed and counted. A judge in Georgia dismissed the campaign’s suit there less than 12 hours after it was filed. Biden attorney Bob Bauer said the suits were legally "meritless."

Their only purpose, he said "is to create an opportunity for them to message falsely about what’s taking place in the electoral process.”

It was unclear when a national winner would be determined after a long, bitter campaign dominated by the coronavirus and its effects on Americans and the national economy. The U.S. on Wednesday set another record for daily confirmed cases as several states posted all-time highs. The pandemic has killed more than 233,000 people in the United States.

Beyond the presidency, Democrats had hoped the election would allow the party to reclaim the Senate and pad its majority in the House. But while the voting scrambled seats in the House and Senate, it ultimately left Congress much like it began — deeply divided. 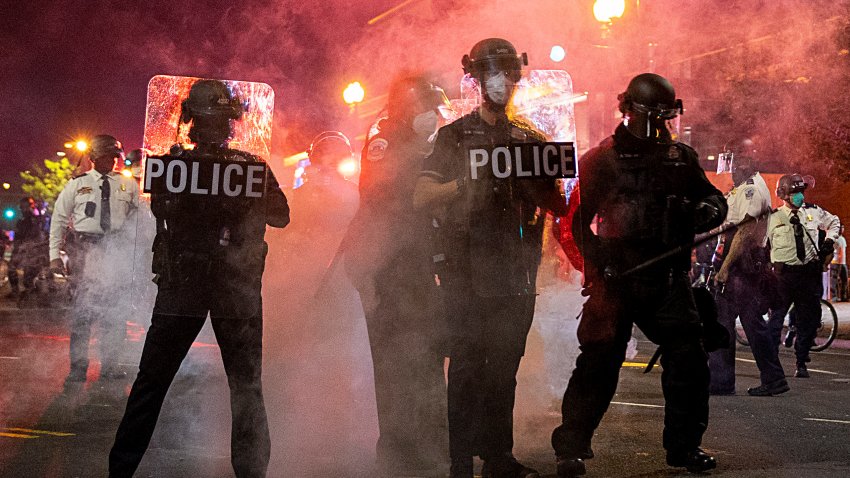 Voters Around the US Approve Local Police Reform Measures