Angels Rally For 4-3 Victory Over Dodgers in 10 innings

Iglesias also homered for the Angels, who have won three of the four games in this year’s Freeway Series. He led off the 10th with a double down the right-field line off Garrett Cleavinger (2-4) to score Jo Adell, who began the inning as the automatic runner on second.

Jack Mayfield, who tied it at 2 with a solo shot in the sixth, added an insurance run in the 10th with a bloop RBI single to right. Dodgers infielder Max Muncy tried to make an over-the-shoulder running grab but the ball squirted out of his glove.

The Dodgers still managed to make things interesting in the bottom half. Muncy's single to right moved Justin Turner to third base. After Albert Pujols struck out, Corey Seager nearly won it when he connected on a fastball by Raisel Iglesias, but it ended up as a sacrifice fly to score Turner as Brandon Marsh caught the ball on the warning track in center. 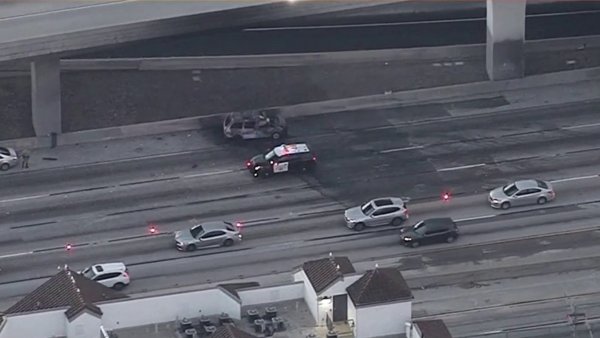 Chris Taylor lined a single to put runners at first and second before Raisel Iglesias got AJ Pollock to ground into a force out at third for his 24th save.

Austin Warren (1-0) allowed one hit in 2 1/3 innings for his first major league win.

The Dodgers are 1-12 in extra-inning games and have dropped 11 straight. The big league record for consecutive extra-inning losses in a season is 12 by the expansion Montreal Expos in 1969.

The Dodgers jumped out to a 1-0 lead in the first when Pujols' grounder drove in Mookie Betts. They extended their lead to two in the fourth when a one-out single by Betts brought home Pollock, who drew a leadoff walk.

The Angels rallied to tie it at 2 on solo shots by José Iglesias and Mayfield in the fifth and sixth. Mayfield’s drive over the center field wall was his seventh homer since the All-Star break, which is second in the AL.

The loss dropped the Dodgers to 1-12 this season in extra innings games, including 11 consecutive losses. One more loss would tie them with the 1969 Montreal Expos for the most extra inning losses in a row in a single season.

David Price retired the first nine Angels hitters before David Fletcher led off the fourth with a double. The left-hander went 5 1/3 innings, his second-longest start of the season, and allowed two runs on four hits and struck out four.

Patrick Sandoval labored through five innings for the Angels but was able to limit the damage to two runs. He allowed seven hits and two walks with four strikeouts.

The left-hander's best job of pitching out of a jam came in the fifth. Muncy led off with a double and advanced to third on Pujols' grounder, but Sandoval got Seager to ground weakly to second and then got Taylor looking to get out of the inning.

Plate umpire Gabe Morales took a 98 mph fastball from Dodgers right-hander Joe Kelly in the chest during Iglesias' at-bat in the seventh. Kelly and catcher Austin Barnes got their signals crossed after it appeared Barnes was expecting a breaking ball and missed it.

Morales was stunned for a minute but remained in the game.

Dodgers infielder Trea Turner, acquired in last week’s trade with Washington, was activated after clearing COVID-19 protocols. He came in as a pinch-hitter in the ninth inning but fouled out to the catcher.

Manager Dave Roberts said Turner will be the primary second baseman. He is expected to get his first start on Saturday.

Angels: 1B Jared Walsh (right intercostal strain) is continuing to do fielding drills without any setbacks and could be activated this weekend. ... RHP Andrew Wantz was recalled from Triple-A Salt Lake after RHP Steve Cishek was placed on the bereavement list.

Dodgers: Betts left in the sixth due to right hip discomfort. ... LHP Victor González (right knee inflammation) was placed on the injured list retroactive to Aug. 4. ... RHP Jimmy Nelson will have season-ending elbow surgery and a right flexor tendon repair after moving to the 60-day injured list.

Dodgers LHP Julio Urias (13-3, 3.40 ERA) is tied for the major league lead in wins but allowed five runs in five innings in a May 7 loss to the Angels. RHP Jaime Barria (2-0, 4.12 ERA) has won both his starts since joining the Angels rotation on July 25.