Clayton Kershaw dominated with eight strikeouts, as the Dodgers rocked the Rays 8-3 in Game 1 of the World Series.

During every game this postseason Dodgers' manager Dave Roberts scribbles frantically on a little notepad he keeps on him in the team's dugout. He writes down things he sees, matchups he likes, and future scenarios late in games he might find himself in.

Now more than ever does that notepad come in handy. It is of course Game 1 of the World Series, and the margin for error is microscopic. Any little thing can swing the outcome of a game.

Unless you have Clayton Kershaw.

Kershaw made Roberts' job easy on Tuesday as the three-time Cy Young Award winner allowed just one run, and the Los Angeles Dodgers trounced the Tampa Bay Rays, 8-3, in Game 1 of the World Series at Globe Life Field.

"Kershaw was on," said Rays' manager Kevin Cash. "He had a pretty good breaking ball going with some deception involved. You can see and appreciate why he's going to the Hall of Fame when he's done. He did a really nice job against us."

For the first time in history the World Series was held on a neutral field. So fans of both teams flocked to the brand new $1.2 Billion ballpark deep in the heart of Texas for a battle of baseball's best. The Rays, won an American League-best 40 games this season, the Dodgers won an MLB-best 43.

"Dodger fans travel so well, they're everywhere," said Kershaw of the sea of blue surrounding Globe Life Field for Game 1. "As much as we'd like for this to be at Dodger Stadium in front of 50,000 fans, it was still awesome for them to come here and it definitely helped for sure." From His Blue House to His ‘LA' Wedding Ring, This Dodgers Fan Bleeds Blue 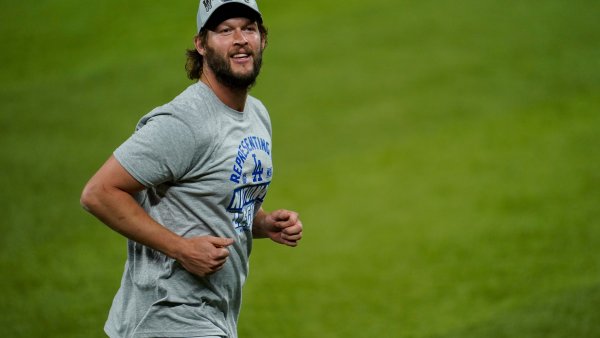 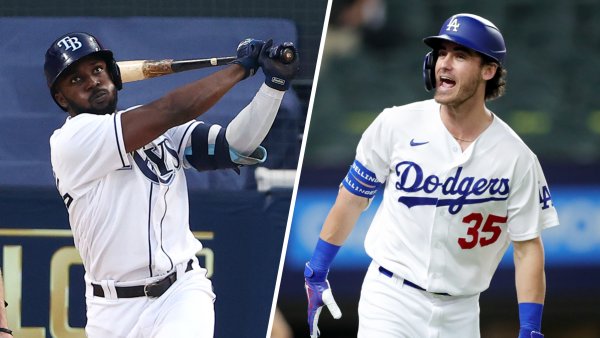 Dodgers and Rays Prepare to Battle in 2020 World Series

The Dodgers earned the victory by defeating one of the best young right-handers in the game in Tyler Glasnow.

The California native has been stellar in the postseason, but he's never faced an offense quite like the Dodgers.

Cody Bellinger—sore shoulder and all—blasted a two-run shot off Glasnow in the bottom of the fourth to give the Dodgers a two-run lead. It was Bellinger's second homer in as many games.

"He's got really good stuff," said Bellinger, who has homered in three of the four games he's faced Glasnow in his career. "But today was just a moment for me where I tried to get the run in and I stayed simple with it.

Kevin Kiermaier cut the lead in half with a line drive lazer that landed in the seats in right field.

"That was a start. It was nice to get a run on the board and get something going our way," said Kiermaier of his homer. "But Kershaw, his resume speaks for itself. He's one of the best to ever take the mound for a reason, and he executed."

The Dodgers broke the game open with a four-run fifth inning.

Mookie Betts became the first player since Babe Ruth to have a walk and two stolen bases in the same inning of a World Series game when he led off the bottom of the fifth with a walk, and then promptly stole second base—earning the entire country a free taco from Taco Bell. After a walk to Corey Seager, the Dodgers called a double-steal to move the runners to second and third.

"Stolen bases are a thing for me. I take pride in them," said Betts. "That's how I wreak havoc on the opposing team."

The three total stolen bases in the inning were the most in a World Series since the New York Giants did it against the Boston Red Sox in 1912.

Two batters later, Max Muncy grounded to first base and Yandy Diaz threw home. Betts slid under the tag and the Dodgers had a 3-1 lead.

Will Smith, Chris Taylor, and Kiké Hernandez all followed with RBI singles and the Dodgers handed Kershaw a five-run lead. For Glasnow, he became the first pitcher in MLB history to allow six or more runs and issue six or more walks in a World Series game. He did it by throwing 112 pitches, the most by a Rays' pitcher all season.

"I have to execute pitches better," said Glasnow of his start. "I have to hold runners better. Tonight was definitely a frustrating one."

Entering the World Series, the Dodgers most valuable player was Betts. Not because of his 2018 AL MVP Award, or his championship pedigree. No, Betts is one of the only players on the Dodgers roster who played most of his career in the AL East, and therefore was unapologetically familiar with the Rays pitching staff.

Betts became the first player in World Series history to have a home run, two steals, and two runs scored in a game when he hammered a first-pitch sinker from left-hander Josh Fleming deep into the stands beyond the right field wall. Believe it or not, the home run was the first of the 2020 postseason for Betts and it ensured a blowout victory as the Dodgers took an 8-1 lead.

"I did a good job tonight, but my main responsibility is to win a world series and that's all I'm trying to do," said Betts humbly.

That would be all that Kershaw would need as he cruised through six innings on just 78 pitches. Kershaw's eight strikeouts moved him into second place on the all-time postseason strikeouts list with 201, just four shy of the record set by Justin Verlander.

"If we play at our best, I think we are the best team," said Kershaw. "Our clubhouse believes that, but as a collective group if everybody is playing they way they're supposed to, I don't see how we can get beat."

Kershaw also is now tied for second place with the most games in postseason history with eight strikeouts, allowing one run or fewer with six.

More importantly, he put the Dodgers in control of the World Series.

"Game 1 is important. It's good to get off on the right foot for us," said Kershaw. "We know it's just one though, so for us, knowing what the Rays have, and they have Blake Snell going tomorrow, we know we're in for a tough time tomorrow, but we'll be ready to go."