Knott's Scary Farm Shines a Light on Its New Experiences

A trio of fresh and frightful shows will debut at the Buena Park fright fest, in addition to a new "Mesmer"-izing maze and sepia-toned scare zone.

When you talk about "shining a light" on something, all to illuminate it and make it easy to discern, you're likely referring to an invigorating topic, an interesting development, or another matter that people should know about.

But when it comes to eerie attractions, the sorts of spooky spectaculars that happily haunt adventurous visitors after nightfall, you don't want the light you shine to be too bright.

Keeping the atmosphere on the eekier side is your ghoulish goal, in short, which is just what Knott's Scary Farm, the venerable, nearly-50-year-old fright fest, seeks to do.

So let's use the light of the lantern held by the ghostly conductor, the phantom-like figure promoting the 2021 event, as the illumination we need to see all of the new offerings just announced by the happening, which will frightfully unfurl at Knott's Berry Farm at Buena Park, on select nights, from Sept. 16 through Oct. 31. 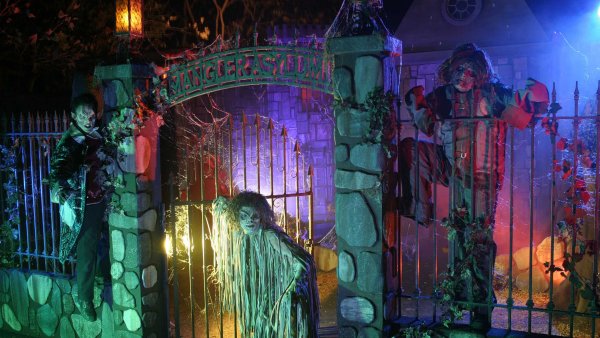 Over at The Mystery Lodge? A spine-tingling "digital illusion horror show" called "Invitation to Terror" will whisk guests back to the Calico of the late 1800s.

And speaking of Calico? Make for the Calico Mine Stage to hear a line-up of rockin' bands during "Carnaval du Grotesque," if you prefer music with a monstrous beat.

As for the debuting scare zone? Welcome to "The Gore-ing 20's," which will dip into the "dark decadence" of the decade that rolled out a century ago.

And finally, "Mesmer: Sideshow of the Mind," will make its first-ever appearance at the after-sundown experience.

"Within the canvas tent lies the secret of the most potent force in the universe: the human mind," promises the Knott's team, so if you're ready to take an interior journey, but one with plenty of jumps and startles, be sure to swing by this novel offering.

Knott's Scary Farm also recently revealed that a septet of spooky favorites will return, with seven tried-and-true-and-terrifying mazes popping up at the 2021 event.

"Dark Ride," "The Depths," and several other shadowy mazes are on the roster, so peruse all if you're feeling bold.