Mr. Holmes Bakehouse Larchmont is teaming up with Smitten Ice Cream for a one-day-only offbeat treat.

Summer can be defined in many whimsical ways.

It's pretty much the sunniest of seasons, and the most swimsuit-iest of stretches, too. If you're going to have a beach picnic, chances are solid it will go down in July or August, and attending an outdoor evening movie? Nighttime temperatures are likely mild, making summer the ideal time.

But summer also wears another crown, one that cuisine-related, and one that is rarely acknowledged outrightly, though we all know it: It's the season when we're more inclined to eat food out of a different, hollowed-out food, which is immediately followed by eating the hollowed-out food. 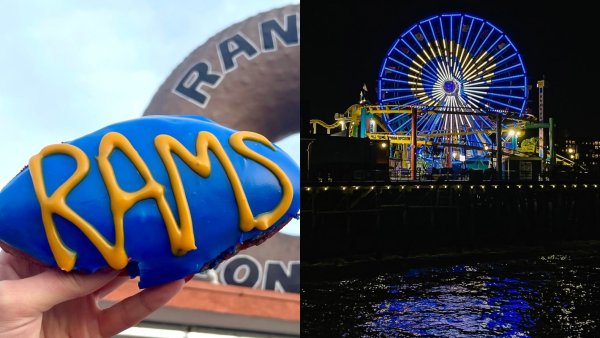 Or consider the cruffin, a croissant that's baked in a muffin shape, an unusual pastry that can be found at Mr. Holmes Bakehouse.

On one magical date — peering into the future reveals it to be Saturday, July 29 — the treat shop's Larchmont location will pair up with Smitten Ice Cream for a flavorful meeting of the minds.

The result? Ice cream "cones" fashioned out of cruffins, with three ice creams to choose from.

You've eaten cold goodies while gripping a sugar cone, and perhaps you've tried a waffle cone, too. But have you savored a scoop of something delish while clutching a Cruffin Cone?

Call this a photo-ready first, and potentially delectable, too.

A few facts? Both Smitten Ice Cream and Mr. Holmes Bakehouse hail from our sisterly mega-city to the north, the lovely land known as San Francisco. And Smitten's scoopable sweets? All churned upon order.

But don't daydream at length about what churned ice cream served inside a croissant-muffin cone tastes like; the July 29 pop-up event is a "limited time" kind of deal, which means that if you arrive to late, all of the cruffin cones may already be gone, gone, gone.

So mark this time down: 11 in the morning. Larchmont. Mr. Holmes Bakehouse. The last Saturday in July.

Have you devoured enough foods stuffed in other foods this summer? Time to get on that with the help of churned-right-there ice cream and a cone that's both a muffin and a croissant.