One Year After Pregnant Wife's Tragic Death in DUI Crash, Widower Celebrates Their Daughter on Her First Birthday

Yesenia Aguilar was 35 weeks pregnant when she was struck and killed by a drunken driver in Anaheim. Her baby girl was delivered by emergency c-section and survived.

It has been one year since James Alvarez’s wife, who was pregnant with the couple’s first child, was killed when she was struck by DUI suspect as the couple took a sunset walk in Anaheim.

Sunsets remind him of that terrible day, but when he looks into the eyes of daughter Adalyn Rose, who turned 1 on Wednesday, he is uplifted with a reminder of Yesenia Aguilar’s legacy.

“I want her to look back when she’s older, when she asks about her mommy, I can always show her pictures, and I can always tell her, ‘I always kept her spirit alive,’” said Alvarez. “No matter what obstacles we face in life, we can always find a solution and move forward. (Adalyn) taught me to never give up.” 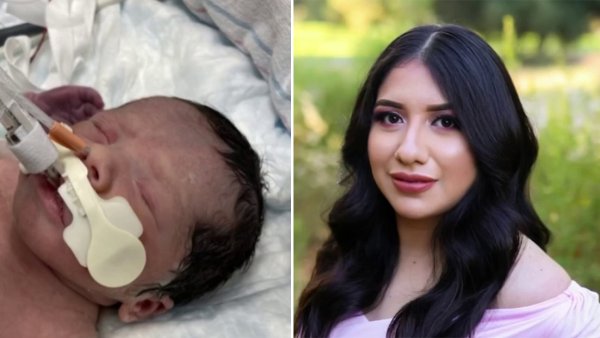 A vigil is planned for Wednesday night at the site of the crash to remember 23-year-old Aguilar.

Alvarez’s Instagram feed documents the moments he has shared with Adalyn in the 12 months since the crash. There are photos of Alvarez with Adalyn at the hospital in the agonizing days following his wife’s death. Those are followed by photos of the baby’s grand welcome home, holiday images, Father's and Mother's day, and many other memories.

He will celebrate Adalyn’s birthday Wednesday with cake and one candle. And, they plan to visit the cemetery where her mother is buried.

The couple was on an evening walk when 23-year-old Aguilar, who was 35 weeks pregnant, was struck. The couple’s baby, was delivered in an emergency c-section.

Aguilar died at the hospital.

"I'm living a nightmare. I just want to wake up," said James Alvarez, whose wife was killed when a suspected DUI driver plowed into them as they walked on the street in Anaheim. Vikki Vargas reports Aug. 11, 2020.

‘When I see the sunset, it always brings me back to that day,” Alvarez said.

The route they were walking that day wasn’t their usual one. Alvarez said the couple decided to take the long way so they could stop to buy nursery curtains.

A Garden Grove woman was arrested and charged with a felony count of murder and other crimes, including a count of driving under the influence of drugs causing injury.