Gov. Gavin Newsom urged people to turn to their "better angels" and use common sense but said, "It’s more education. I’m not coming out with a fist."

Californians should wear masks and skip Fourth of July family gatherings, Gov. Gavin Newsom pleaded as the state’s coronavirus tally surged. But the governor stopped short of threatening a crackdown on those who violate state public health orders.

Newsom on Thursday urged people to turn to their “better angels” and use common sense but said, “It’s more education. I’m not coming out with a fist.”

His request came a day after over 4,000 more cases of COVID-19 were reported in California.

While some areas of the state have shown relatively few cases, some of the most densely populated are struggling with rapid rises in infections and hospitalizations. The rates of hospitalizations and positivity — the proportion of those tested who were found to have the virus — have soared over the past two weeks.

Dr. Mark Ghaly, the state’s top health official, called the holiday weekend a “big deal” for efforts to contain the virus and urged people to behave differently than they did on Memorial Day weekend, when many gathered socially. Authorities say that behavior helped spur the latest surge of cases.

With slackening of the state’s stay-at-home order, there have been instances where bars, restaurants and beaches were packed, and some people did not wear masks during mass protests over the police killing of George Floyd in Minneapolis.

State authorities sent letters Thursday to every employer — about 350,000 businesses — warning that failure to implement the face coverings order could result in fines and potential criminal prosecution.

Newsom said seven state agencies with regulatory authority would target non-compliant businesses, including the Department of Alcoholic Beverage Control, the Department of Consumer Affairs and the California Highway Patrol.

Public health officials say many people who have been clustering indoors or out haven’t been heeding health precautions, especially younger people.

Health officials have said there's nothing political about wearing face masks to stop the spread of COVID-19. Hetty Chang reports for the NBC4 News at 11 p.m. Thursday June 18, 2020.

Sacramento County reported that nearly half of all those testing positive for COVID-19 are under the age of 40.

Coco Cocozzella, who wore a black face covering while outside in Sacramento, said masks are “kind of a pain” but she doesn’t mind the state mandating she wear one. At home, she said, she keeps hers on a hook with her keys to remember to take it when she goes out.

She said fines are a step too far but people who don’t wear a mask should be “stopped and warned.”

“You should get a little scared,” she said.

On Sunset Boulevard in West Hollywood on Thursday morning, some wore masks as they walked their dogs and others, who declined to comment, held their masks in their hands or wore them improperly under their noses or hanging off their ears.

Andrew Stuart wore an orange bandanna as he took a selfie with his dog, Voltron.

“If you can wear a piece of cloth over your face and maybe save a life, it’s worth it,” he said.

California had been on a good trajectory with its virus efforts until mid-June.

Newsom this week retreated from the ongoing reopening of California’s economy, shuttered in mid-March in an effort to slow the spread of infections. Recently reopened bars, indoor restaurant dining and other indoor entertainment venues were ordered closed back down for at least three weeks in 19 counties on a state watch list because of troubling virus increases, and singing was banned at religious services. 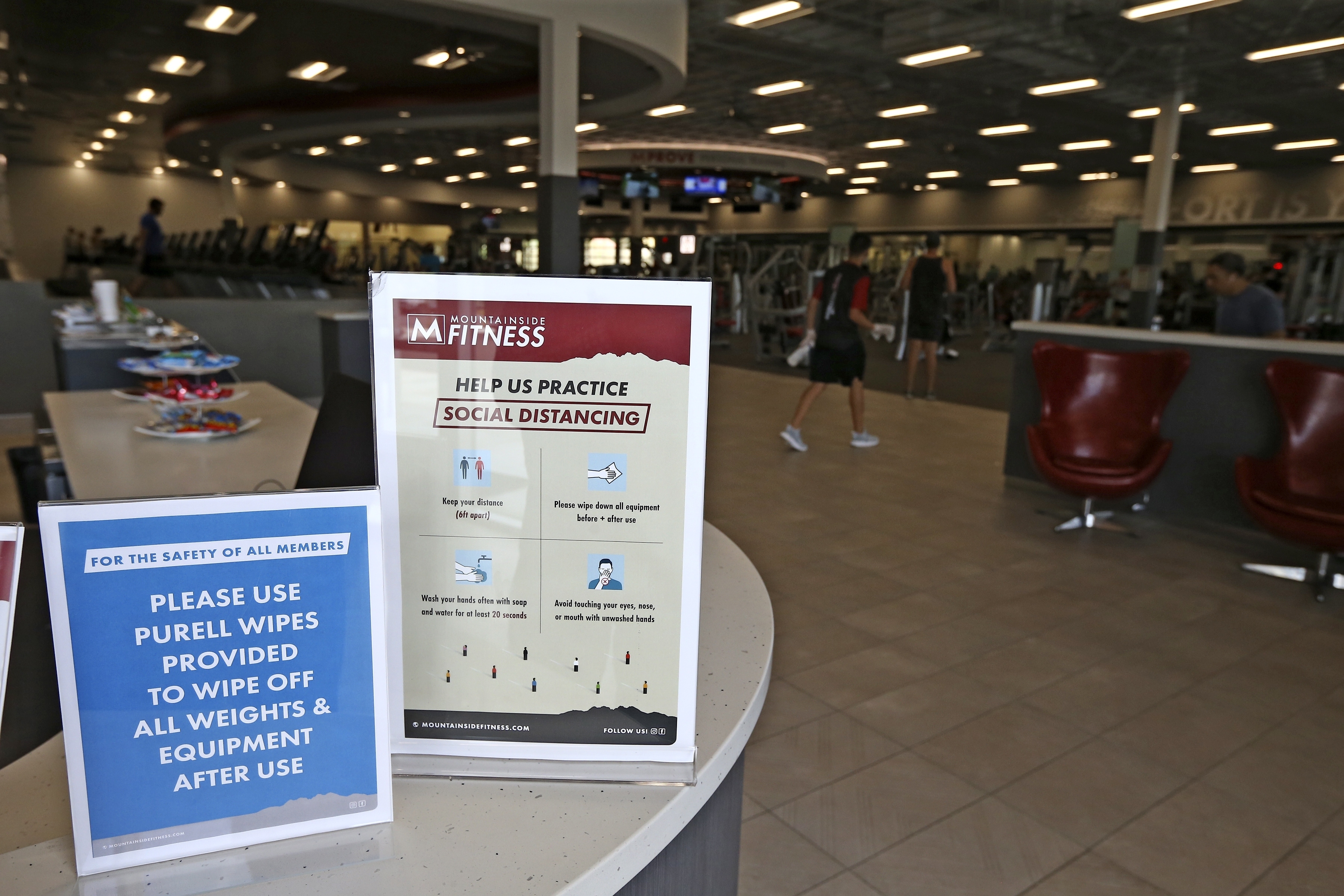 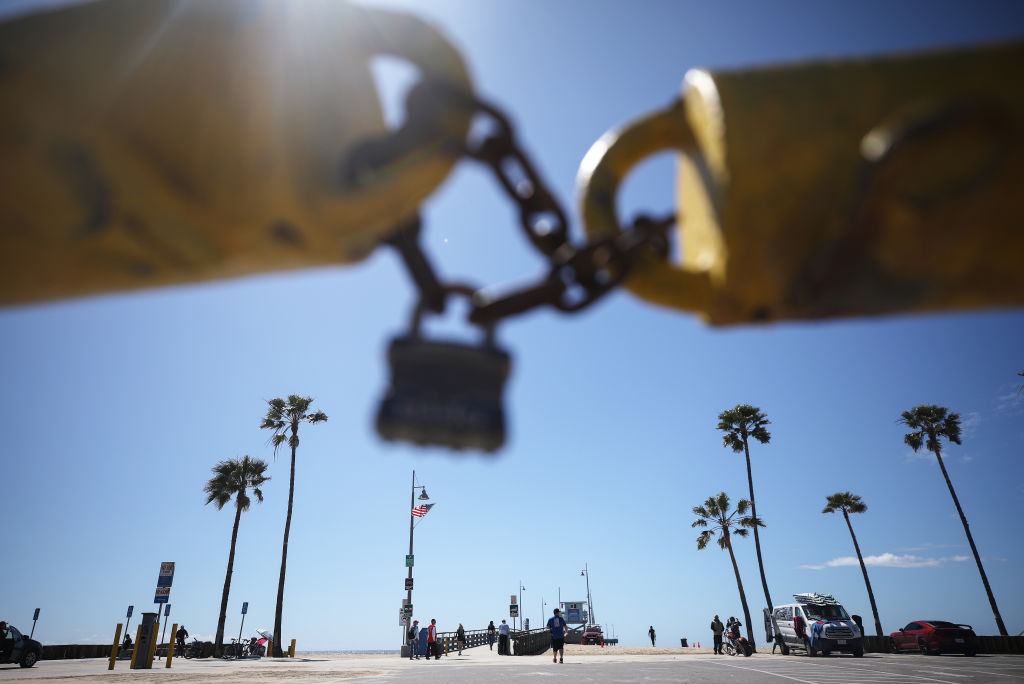 San Diego, the state’s second-largest county, previously wasn’t among that group, which contains much of the state population. But local authorities said Thursday the state had notified them that San Diego County would join the list Friday following a series of outbreaks this week.

However, Newsom on Thursday said enforcement would have to rely mainly on people obeying health orders, including a two-week-old requirement to wear face coverings in public. But he didn't rule out stronger measures if necessary.

“If 40 million people want to turn their back on civil society and abuse the rules, laws and regulations on a consistent basis, then society begins to erode,” he said. “If you’re not seeing behavioral changes then we think citations are appropriate where there’s abuse.”

One ad shows a person breathing on a ventilator with a mask that reads: “Even without symptoms, you can spread COVID-19. And people can die. People like your mom.”

Across the state, local officials largely parroted the governor’s words about the importance of personal responsibility. But they also took action. Along the coast, many beaches and parks were closed or access was restricted. Fireworks shows were canceled up and down the state.

Three cities announced they were ready to fine mask scofflaws as a last resort. That would set you back $300 in West Hollywood and $100 each in Santa Monica and Monterey.

In neighboring Orange County, where officials had fought Newsom’s order to close down beaches and the health officer resigned due to harassment that followed her order to wear face coverings, Supervisor Michelle Steel and Sheriff Don Barnes advised people to wear masks. The sheriff said his deputies will urge voluntary compliance rather than use aggressive enforcement.