The pickup pursuit came to an end after the driver crashed into at least two vehicles and lost a tire after running over a spike strip.

A speeding pickup truck driver traveling the wrong way on a freeway slammed head-on into a car Friday during a harrowing pursuit in South Los Angeles.

The chase began around 10 a.m. after a report of a stolen vehicle and ended nearly two hours later when the passenger and driver, wearing a cowboy hat and track pants, got out and tried to run from officers in a residential area.

A driver crashed into at least two vehicles and left behind a trail of damage during a pursuit in South LA. John Cadiz Klemack reports for the NBC4 News on Friday May 22, 2020.

The chase began in the Pomona area before exiting the freeway onto streets in the South Los Angeles area, where a series of dramatic moments unfolded. The driver of the Chevy was traveling at high speeds through business districts and residential areas, at times on the wrong side of the street and on sidewalks.

The driver hit a spike strip and skidded to a brief stop, but continued a tour of the same neighborhood before entering the 110 Freeway. The pickup was speeding the wrong way when it crashed head-on into a car near an entrance ramp.

The driver was boxed in behind another pickup truck on a narrow street, but rammed into the rear of the vehicle, leaving behind a cloud of tire smoke from its spinning rear wheels. Moments later, a rear tire shredded off its rim.

Umberto Salazar, who was in the other pickup, said he didn't realize what was happening.

"He pushed me against a truck, there was no where to go," he said.

At some point, someone threw an object at the pickup, leaving an orange splatter pattern on the windshield. It's not clear what was thrown at the pickup.

The chase ended when the driver and passenger ran from the truck in residential area. They were immediately chased down by officers and taken into custody as two excited dogs barked through a fence at the commotion on the sidwalk. 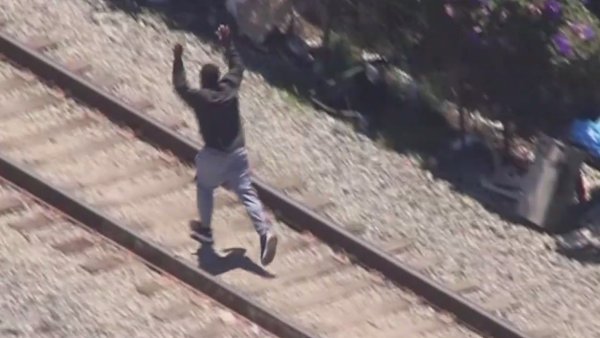 Pursuit Driver Reaches End of the Line on Railroad Tracks 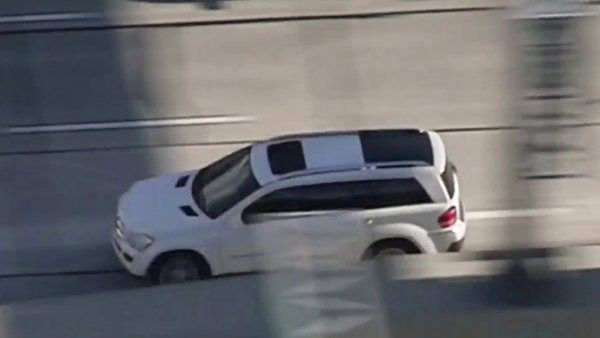