6 Questions Heading Into Next Set of Democratic Primaries

The newly formed two-man race for the Democratic presidential nomination debuts Tuesday, a week after Joe Biden benefited from a rapid consolidation of moderate and establishment voters, while Bernie Sanders outlasted Elizabeth Warren as the progressive left’s last hope.

Here are the big questions heading into six primaries that put a combined 352 delegates at stake between Biden and Sanders:

Fresh off Biden’s Super Tuesday surge, when he won 10 out of 14 state contests, the former vice president has 664 delegates to Sanders’ 573, according to Associated Press calculations, with some still to be allocated. Sanders’ deficit isn’t insurmountable, considering 1,991 delegates are needed for the nomination. But the Vermont senator’s hill is steeper than it might look given Democrats use a proportional system to award delegates, not a winner-take-all model like Republicans.

Michigan and Washington, the states with the two largest delegate counts on Tuesday, are critical. Sanders topped Hillary Clinton in both states four years ago, with his Michigan primary win giving him the momentum to carry on through the end of the nominating calendar in June. Even then, he never could catch Clinton.

Following Michigan in 2016, Sanders’ single largest net gains came in three caucuses: Idaho (plus-13 for Sanders), Utah (plus-21) and Washington state (plus-47). The bad news for Sanders: Utah switched this year to a Super Tuesday primary, so those delegates already are accounted for. Washington and Idaho hold primaries Tuesday, with a larger, more unpredictable turnout expected than in 2016. Even if Sanders wins in those states, it will be difficult to replicate the margins he managed against Clinton, and the later it gets in the process, the more a second-place candidate must run up the score to catch the delegate leader.

IF THERE’S NO REAL PATH, WILL A SANDERS PROTEST CAMPAIGN REMAIN?

Top Sanders aides look back at 2016 and admit that the democratic socialist was running to make a point and didn’t expect his bid to blossom the way it did. This time, everyone in Sanders’ circle said he’s running to win. What does that mean if any reasonable path is closed? If Sanders remains, and his passionate base along with him, will they act more as advocates for his progressive preferences as an aggressive insurgency bent on attacking Biden?

Sanders and Biden have stuck mostly to differences on policy and vision. But Biden has made clear he’s aware of Sanders’ more outspoken supporters on social media. "I know I’m going to get a lot of suggestions on how to respond to what I suspect will be an increasingly negative campaign that the 'Bernie Brothers' will run," Biden told a group of donors over the weekend. "But we can’t tear this party apart and reelect Trump. We have to keep our eyes on the ball."

WHERE DO ELIZABETH WARREN’S BACKERS GO?

Massachusetts Sen. Elizabeth Warren ran as a progressive in Sanders’ ideological lane, for months even avoiding her own single-payer health insurance proposal with a simple line: "I’m with Bernie."

But Sanders and Biden aides have always quietly argued that Warren had more overlap at the ballot box with candidates like Pete Buttigieg, Amy Klobuchar and Kamala Harris – each more moderate and establishment than Sanders. Put another way, Warren’s cultural lane – white college-educated urban dweller – was more important than her ideological lane.

That worked well for Sanders when the field was crowded. Now, it’s not quite so helpful, with Super Tuesday trends suggesting Warren’s backers don’t migrate cleanly to Sanders. In fact, there was evidence that some of her supporters chose Biden even before Warren dropped out, since Biden won her home state of Massachusetts.

TURNOUT: WILL A NOVEMBER ANTI-TRUMP COALITION CONTINUE TO TAKE SHAPE?

More surprising than Biden’s win total on Super Tuesday was the coalition behind it.

In Virginia, about 500,000 more voters cast ballots in 2020 than in the 2016 primary, and it didn’t help Sanders, who watched his vote share drop from 35% in 2016 to under 25% this year. Biden, alternately, drew about 200,000 more votes than Clinton did four years ago, fueled by his expected base of African Americans but also by white voters in the northern Virginia suburbs of Washington, D.C.

The diversity in Michigan — with heavily African American Detroit, the racially and ethnically mixed Detroit suburbs and wide swaths of working-class voters — will offer another general election battleground measure for that coalition's enthusiasm.

Sen. Bernie Sanders, I-Vt., won the Nevada Democratic caucuses in a runaway victory on Saturday. The second- and third-place winners have not yet been announced.

African Americans showed up for Biden in a huge way on Super Tuesday, helping him win a competitive Texas primary and by wide margins in Alabama, North Carolina and Virginia. Whether that translates beyond the South could determine the outcome in Michigan and Missouri.

In Detroit, Michigan's largest city, more than 78% of residents are African American. Black voters are key in St. Louis and Kansas City, as well. Sanders likely will be hoping for a younger black electorate: AP VoteCast data from Super Tuesday showed the senator about even with Biden among black voters younger than 45. 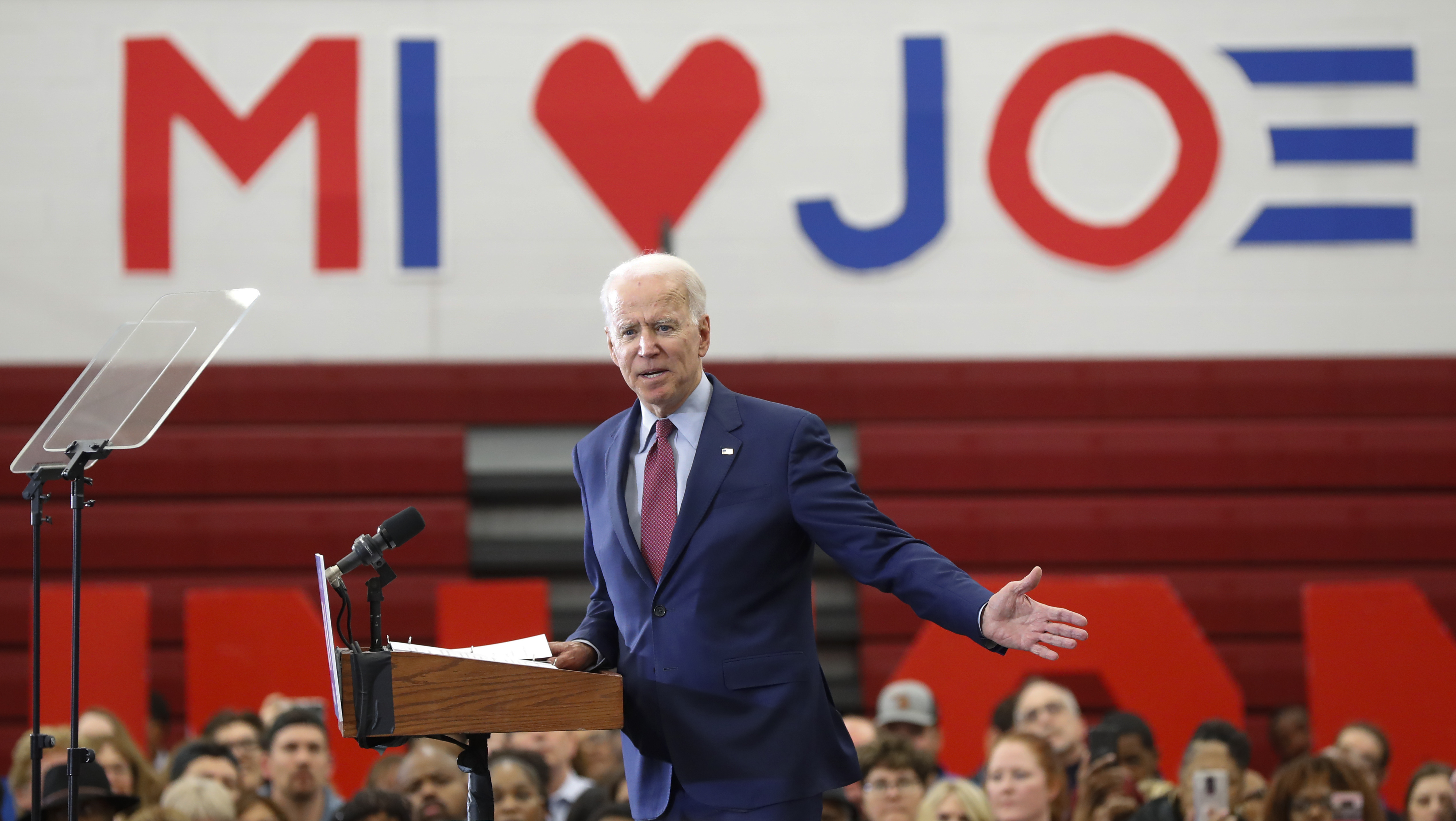 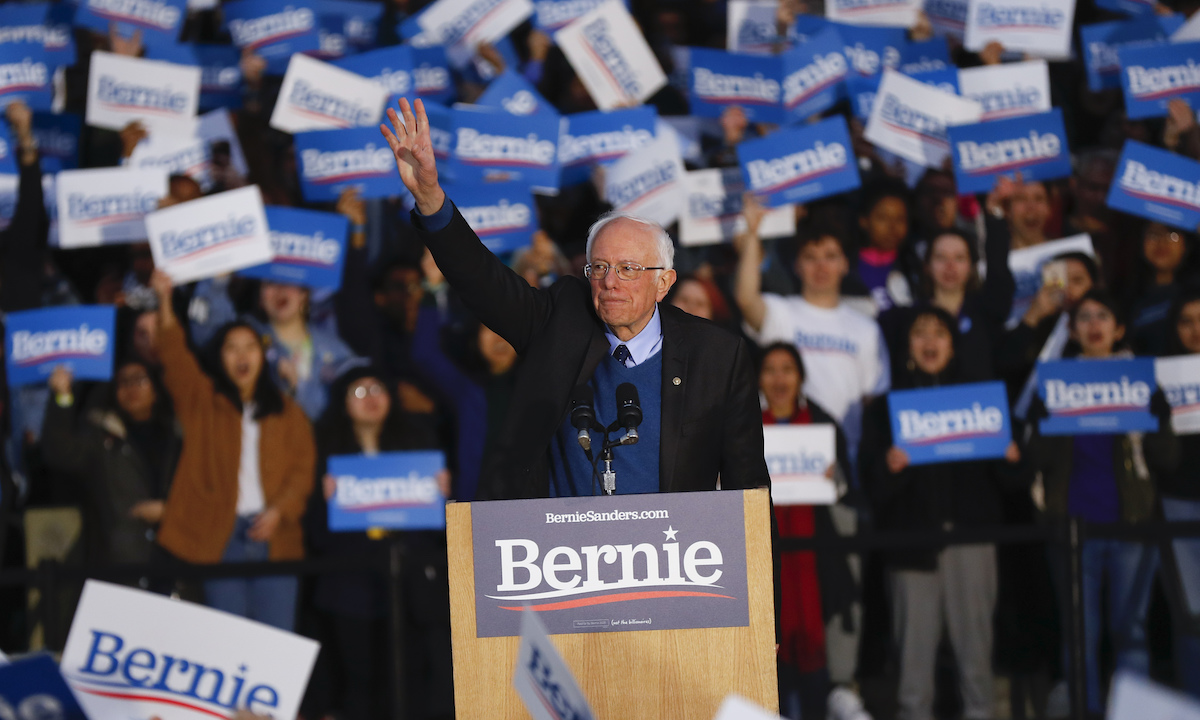 But older African Americans usually vote in higher proportions. Biden expects a big victory in Mississippi, where a solid majority of Democratic ballots will be cast by African Americans. In neighboring Alabama last week, more than 7 out of 10 black voters chose Biden.

WHO CONSOLIDATES LABOR’S RANK AND FILE?

Michigan has more than enough union members to sway a presidential primary (about 600,000, according to federal statistics). Biden and Sanders both make a claim on being labor’s candidate, Biden more through relationships with union leaders and Sanders with direct appeals to the rank and file.

Sanders got the better of that mix in Nevada. The Culinary Union there nodded to Biden by criticizing Sanders’ single-payer "Medicare for All" health insurance idea, but the union didn’t endorse, and caucus sites up and down the Las Vegas Strip showed Sanders got rank-and-file support.

Sanders will likely need a repeat in Michigan, where the most high-profile labor group – the United Auto Workers – hasn’t taken a side.