50 games into the 2021 season, and the Dodgers have already doubled last season's total.

As of today's date, injuries have made 20 players miss a total of 547 days on the IL, totaling over $14.5 million in salary to injured players.

The biggest blow of course was the announcement on April 5 that 2019 National League MVP Cody Bellinger was going on the IL with a hairline fracture to his left fibula. Bellinger suffered the injury while trying to beat out an infield single in a 10-3 victory over the Oakland Athletics just five games into the season.

However, Bellinger is expected to return to the Dodgers lineup on Saturday and Sunday. Super-utility player Zach McKinstry will join him on the flight to Los Angeles, but it's still uncertain which day he will be activated.

Tony Gonsolin (right shoulder inflammation) – After missing out on the fifth and final spot in the Opening Day starting rotation, Gonsolin made the Opening Day roster albeit in the bullpen. However, before throwing a single pitch in the 2021 regular season, Gonsolin felt discomfort in his right shoulder and was placed on the IL retroactive to April 1. On Friday, May 28, Gonsolin made a rehab start with Triple-A Oklahoma City and threw 3 and 2/3 innings before coming out of the game. He was also trolled by the El Paso chihuahuas mascot. Dodgers manager Dave Roberts said he's waiting to see how Gonsolin feels after the start, and ideally he would be able to go at least five innings before returning to the big league roster.

Cody Bellinger (Hairline fracture in left fibula bone) – As previously mentioned, Bellinger went on the IL on April 6th with a hairline fracture in his left fibula. Initially, Bellinger and the Dodgers believed he had just been spiked on his left calf and would be okay in a few days. X-rays and an MRI revealed nothing, but Bellinger continued to feel a "sharp pain" while running. A CT scan a few days later showed the hairline fracture in the fibula, and Bellinger was placed on the IL indefinitely. Bellinger went on a rehab assignment with Triple-A Oklahoma City last weekend and in five games he belted two homers with three RBI. On Friday, Dodgers' manager Dave Roberts announced that Bellinger would be activated off the IL on Saturday and start in centerfield in the final two games against the San Francisco Giants at Dodger Stadium.

Zach McKinstry (Right oblique strain) – Outside of Justin Turner, McKinstry has been the Dodgers best hitter to start the season. The rookie has 16 hits, five doubles, three homers, and 14 RBI in just 17 games to begin the 2021 campaign. However, on Thursday, before the four-game series against the San Diego Padres at Dodger Stadium, McKinstry experienced pain in his lower back while taking batting practice. McKinstry was scheduled to start the game, but was immediately scratched after experiencing the pain. Later tests revealed an oblique strain that will sideline McKinstry for a minimum of three weeks. Similar to Bellinger, McKinstry also played five games last week with OKC and had five hits and five runs scored. On Friday, Dodgers' manager Dave Roberts announced that McKinstry would join Bellinger in Los Angeles on Saturday and could be activated either that day or Sunday.

Brusdar Graterol (Right forearm) - The Bazooka went on the injured list on April 29, after experiencing right forearm tightness during an appearance against the Cincinnati Reds on April 26. Graterol was immediately shut down, but just over a month later, he's beginning to ramp back up again. Roberts announced on Friday that Graterol traveled to El Paso, Texas where he threw a live bullpen session facing Bellinger and McKinstry. The team will wait and see how he feels in the coming days before announcing a next step.

AJ Pollock (Left hamstring strain) - Pollock suffered a grade 1 left hamstring strain on May in Anaheim, and took a few days off to rest and recover before returning to the starting lineup on May 14. However, Pollock re-aggravated the hamstring strain while running from first to third and immediately at to come out of the game. After taking two weeks off to rest the injury, Pollock was seen running the bases at Dodger Stadium on Thursday ahead of the four-game series with the rival Giants. Roberts announced that Pollock is expected to go on a rehab assignment with Single-A Rancho Cucamonga next week and could travel with the team to Atlanta next Thursday.

Corey Seager (Fractured finger in right hand) - Seager was hit by a 94MPH sinker from Ross Detwiler and immediately went to the ground writing in pain. Seager tried to walk to first base, but keeled over again and came out of the game. X-rays later that night revealed a fracture in the 5th metacarpal bone on his right hand. It’s the long bone on the base of the pinky finger located just above the trapezium. It was a non-displaced fracture, and will not require surgery. Seager will remain in a cast until the fracture heals and is expected to miss between four and six weeks. On Thursday, Seager was spotted taking groundballs with one arm, throwing with one arm, and has been doing conditioning work. Roberts is hopeful that Seager will not need a rehab assignment when he's fully healthy and "can hit the ground running," although nothing has been decided yet.

Jimmy Nelson (right forearm) - Nelson went on the injured list with right forearm inflammation after experiencing discomfort in a two-inning appearance on May 20 during a bullpen game against the Arizona Diamondbacks. On Friday, Roberts announced that Nelson is expected to throw a bullpen session this weekend. 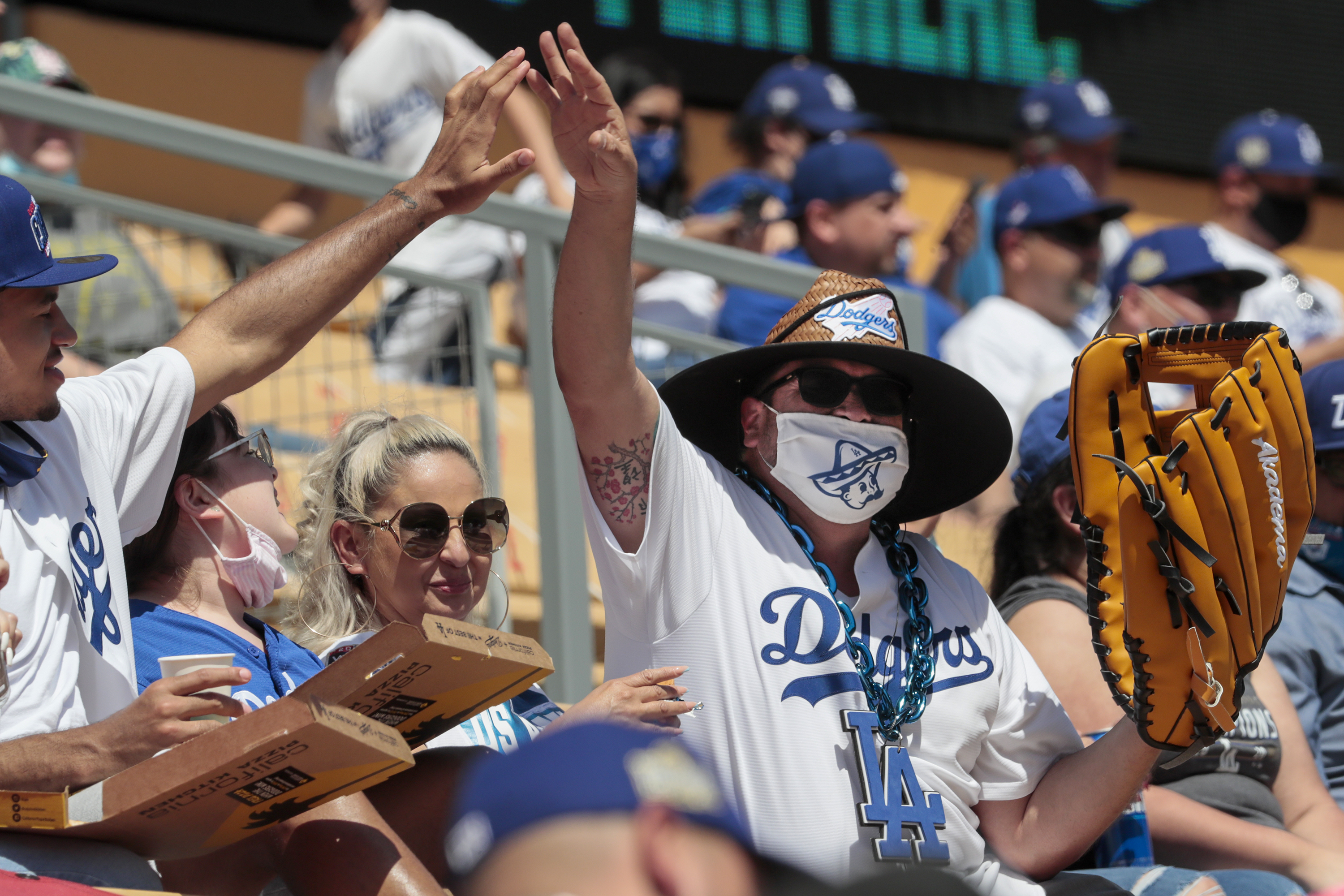 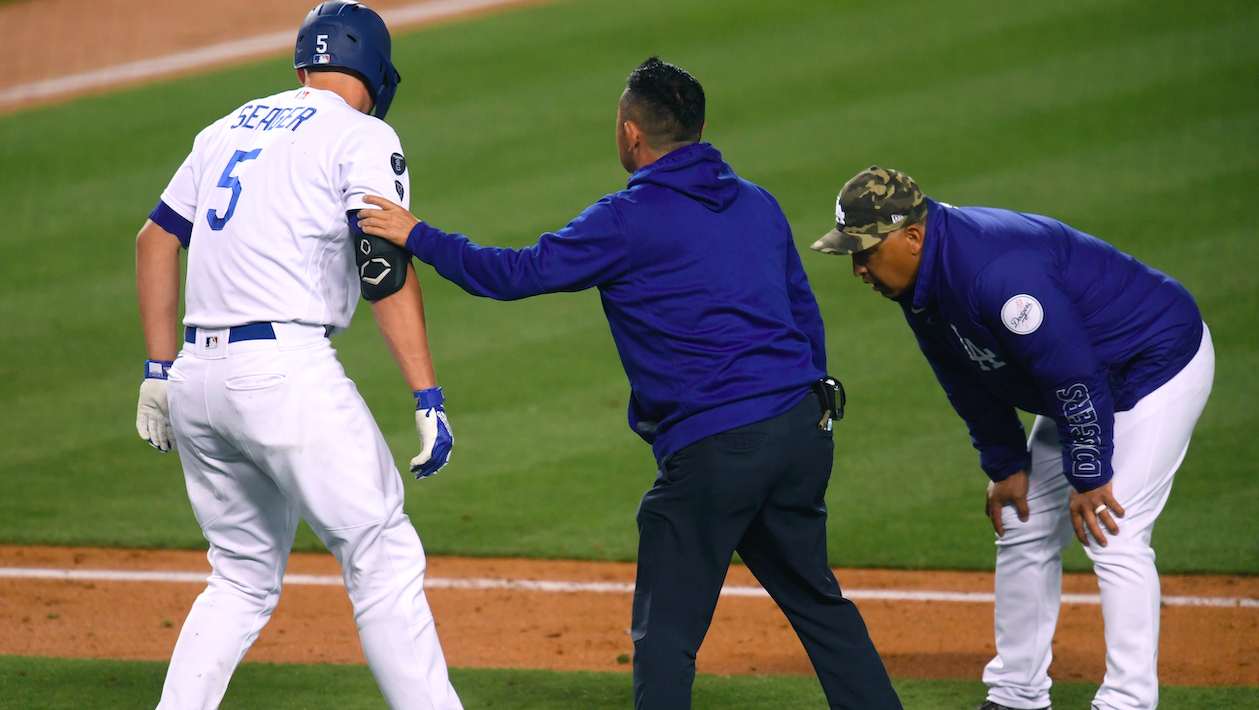 Corey Seager's Fractured Hand is Another Devastating Injury For Dodgers