Here’s the latest news on the Rams vs. Bengals Super Bowl 2022 showdown. Get our coverage on how to watch, commercials, the halftime show, injuries and more.
Rams

Finally, a Los Angeles sports team gets the Hollywood ending it deserves with a victory parade -- a collective celebration that was denied twice by the pandemic.

Los Angeles’ long wait for a victory parade is over.

On Wednesday, the city honored the Super Bowl champion Rams, marking a twice-deferred opportunity to collectively celebrate one of the City of Angels' champions. The victory is the city's third professional sports title since 2020, but parades for the previous two winners -- the Dodgers and Lakers -- were denied by the pandemic.

Fans from as far away as Las Vegas drove to see their favorite players, with many fans skipping work in order to be along the parade route. One fan said she had been rooting for the Rams for over 50 years, and had been waiting just as long to see them win a Super Bowl in Los Angeles.

Los Angeles Rams fans showed up in droves to the team's Super Bowl Championship parade on Wednesday, February 16, 2022 at the LA memorial coliseum, with many skipping work to be there. Players gave shoutouts to the fans and even a performance by LA's own Jay Rock.

Players and coaches spoke in front of a crowd of blue and gold during a post-parade rally outside LA Memorial Coliseum with a special performance by LA-based rapper Jay Rock, and a confetti-filled firework display as Randy Newman's "I Love LA" blared in the background.

"Thank you to everyone who came out to support," Rams' WR Van Jefferson told Michael J. Duarte of NBC LA during the parade.

The built-to-win-now Rams, who acquired quarterback Matthew Stafford in a trade before signing receiver Odell Beckham Jr. and linebacker Von Miller during the season, defeated the Cincinnati Bengals 23-20 Sunday to claim the franchise’s second Super Bowl title. The Rams previously won the Super Bowl in 2000, but that was when they played in St. Louis.

General Manager Les Snead, the architect of the Ram's Super Bowl roster was famous for trading away the team's draft picks for star players that could help the team win immediately. Snead was once misquoted as saying "F them picks," and wore a shirt with the slogan during the parade. One of the best moments of the on-stage celebration was when Snead repeated the now infamous catchphrase.

Stafford, who spent the first 13 years of his career without a playoff victory with the Detroit Lions, was extra exuberant during the parade. The Texas native appeared to be obviously intoxicated, and developed a bit of a Southern accent during his comments on stage. Even seven-time Super Bowl Champion Tom Brady tweeted advice to Stafford during the parade.

“We appreciate you guys so much, this is unbelievable,” said Stafford, speaking at the rally. “So many ups and downs, but you guys were right there with us every step of the way. I am so blessed to be part of this team.

“Just pinching myself about the opportunity to play with these guys.”

A shirtless Aaron Donald also spoke at the rally, hoisting the Lombardi Trophy.

Wearing a t-shirt with a high school photo of Cooper Kupp, Rams offensive lineman Andrew Whitworth, reflected on what brought him to LA. He was acquired by the Rams from Cincinnati.

“Five years ago, I was told I was a little too old,” Whitworth said. “Five years later, I’m holding this trophy up and I’m 40 years old.”

This was Los Angeles’ first victory parade since 2014.

But the wait for a celebratory procession hasn’t been due to lack of championships. The Lakers and Dodgers both won world titles in 2020, but neither franchise had a victory parade due to pandemic restrictions. Those championships came at the end of pandemic-shortened seasons and at the height of a fall 2020 virus surge. 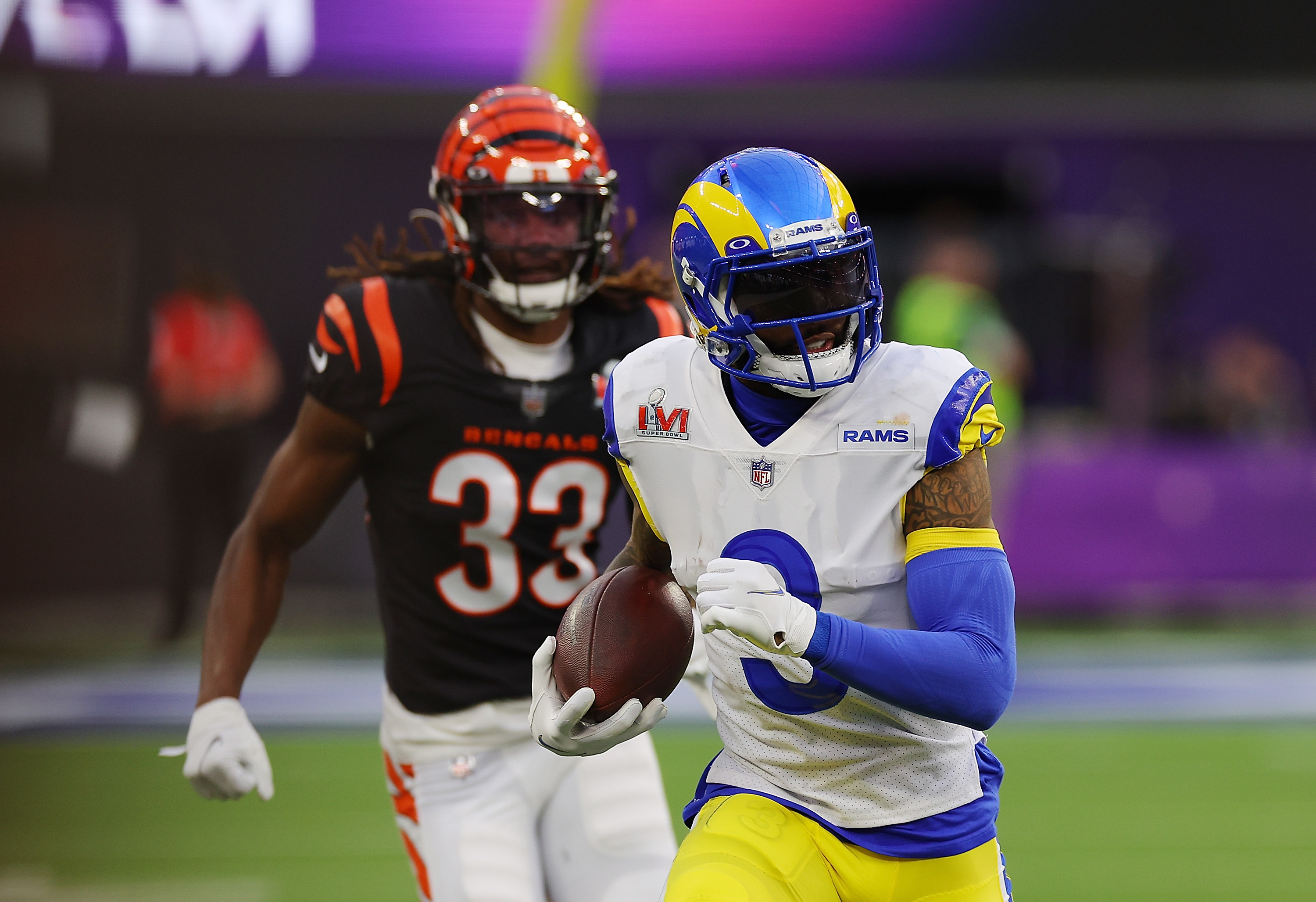 The LA Kings were honored with parades after they won the Stanley Cup in 2012 and 2014.

The Lakers celebrated with a parade after their 2010 NBA title, but the Dodgers haven’t had a parade since their 1988 World Series win.

Lakers star LeBron James was among those suggesting a combined city of champions parade featuring all three teams, but that seems unlikely to happen.

“We, Dodgers and Rams should all do a joint parade together!!!!'' James tweeted Monday. "With a live concert afterwards to end it!! City of Champions. Congrats once again.''

The Super Bowl win marked the high-point of the Rams return to Los Angeles after leaving St. Louis in 2016. The Rams had been in St. Louis since 1995, moving there from Anaheim. Before playing at Anaheim Stadium, Los Angeles Memorial Coliseum was the team’s long-time home.

“The NFL needed L.A., and L.A. needed the NFL,'' Mayor Eric Garcetti said. "It was a broken-heart story. If it was Hollywood, it would have been maybe a rom-com. But at least some sort of romance. But it was our destiny to come back together.''

The mayor thanked NFL Commissioner Roger Goodell, saying the league ``bet big on L.A., not just once but twice, with two great teams.''