Crews rescued a driver and passenger from a truck stuck in a river of water in San Bernardino and freeways and roads were shut down as a major storm ripped through Southern California on Sunday.

A rescue crew hoisted to safety a driver and passenger in a pick-up truck that was stuck on a flooded road in the Cajon Pass.

Freeways and roads elsewhere were shut as heavy rains hit.

Rain and Thunderstorms Expected Throughout Saturday 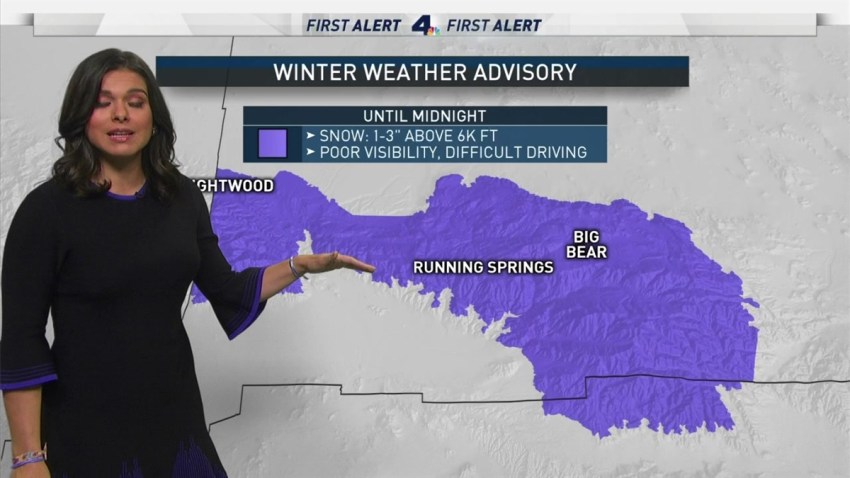 The southern end of the Long Beach (710) Freeway flooded, south of Willow Street, and the Harbor (110) Freeway was underwater at 223rd Street, according to CHP reports.

All southbound lanes were closed for an unknown duration due to flooding on the San Diego (405) Freeway at Cherry Avenue in Signal Hill, the CHP said.

Fire crews were dispatched to reports of people trapped in flooded vehicles on Vermont Avenue, and people were reported to be in need of rescue at a homeless encampment in a park was flooded on Pacific Coast Highway west of the Harbor (110) Freeway.

County weather gauges measured 3.4 inches of rain at Lomita, 2.9 inches at Signal Hill and 2.6 inches on the Palos Verdes peninsula.

The National Weather Service issued a flash flood warning for the Long Beach and South Bay area, and said its radar and gauges detected rain falling at the rate of 3/4-inch per hour.

Los Angeles police said they were watching the Sepulveda Basin, where busy Burbank Boulevard by midmorning was already covered in standing water on two of the three eastbound lanes. A police sergeant said officers were ready to declare the road closed as more rain arrives.

County geologists said Saturday that the cliffs in Malibu Canyon were unsafe, and boulders might fall on the narrow two-lane linking Calabasas and Malibu. That road might be closed through the end of the week, Malibu officials said.

Residents along Kanan-Dume Road said county road scrapers were working to keep mud off that route starting at 4:30 a.m. At Zuma Beach, fire department bulldozer drivers worked in the surfline Saturday to bolster sand berms in front of the lifeguard headquarters and restroom buildings. At high tide, waves were observed hitting the seawall.